Scott Maulsby, who works with Son Adam, is one of those guys who turns into a contest. After deciding that individual events weren’t enough of a challenge, he branched out into triathlons. When they got too easy, he signed up for his first Ironman competition. That’s 140.6 miles of biking, swimming and running.

Here’s his account of the ordeal, a video Son Adam shot and some random pictures I’ve taken of Scott at other events.

Here’s how he remembers it

It’s a post race tradition to write a summary of the race for other athletes.

The only ‘non race’ story comes from the practice swim. Waited for some partners to swim with. An engaged couple showed up and we swam in the lake for a while. When we were done, they invited me to their wedding. Seriously. They were getting married on race day an hour before start time in their wetsuits. The RSVP card gave a few menu options. Gu or Cliff Shots. Sure enough, they got married. I think they were divorced by lap 2 of the run… 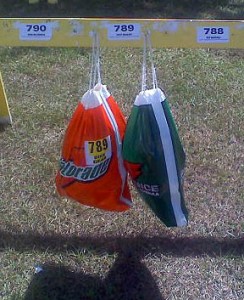 The day before the race I spent most of my time in the fetal position sucking my thumb in the hotel room. Finally went to a movie to get out of my head for a while. Then dinner with the coach and another one of his athletes. I was hoping he would bring the magic pill. He forgot to bring it. The dinner helped. Shared all my fears and by simply letting me know he had gone through the same thing before, I slept like a baby. His final words of advice: ‘Don’t quit’. That came in handy the next day.

Race morning I felt like a million bucks. It was 90 degrees but who cares. The swim was fantastic and exiting the water I was focused and strong. Saw coach in between lap 1 and 2 in the lake and that helped the mental state. The bike was a different story. 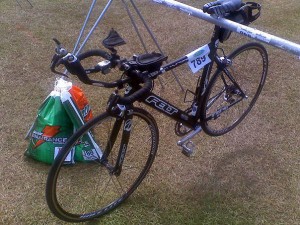 One of the few flat spots was the mounting area. That was 50 yards long and then it was up hill. All day… In the first 0.5 miles I saw at least 10 athletes fixing their bikes. Ouch. Not sure why, but I got emotional in the first mile of the bike. Tears streamed down my face. The bike course was pure evil. The wind was not our friend but every course has wind. It was the Himalayas they trucked in that hurt. They were as relentless as the clock. Not to mention that 5 miles outside of town it was like riding on I95. Cars and 18 wheelers everywhere. One nice young man was hanging out of the passenger window giving us ‘the bird’ and dropping F bombs. We all decided he was on his way to therapy.

Hard to find a rhythm

The first bike loop was rough but I was in it mentally. After the half way point I stopped at an aid station. Spent a few minutes in the Port O Sauna, lathered up with some sun block, drank some cold water and dumped some ice down my back. Leaving the aid station it felt like leaving the parking lot of The Breakers after a day at the spa. Back to the hills. Yes, it was tough going up and fun going down. The challenge was finding a cadence or a rhythm. There was none. Constantly going up or down and shifting gears. It’s tough mentally to pedal with all you have and look down to see 6.1 on the speedometer… The person that set up this course was certainly not going to win the election for Clermont Mayor.

On lap 2 of the bike, people started losing it. Physically and mentally. Watched people zig zagging all over the road. Walking up hills. When I passed one guy and said ‘How you doing?’ he replied: ‘E.T. phone home’. I wished him luck and thanked my coach for a flawless nutrition plan. Got tired of saying ‘nice job’ every time I passed someone so I started saying ‘Who’s idea was this?’. It caught on and by the first run lap everyone was saying it.

Happy to be off the bike and way behind on my time expectation, the run started. First lap was hot. Heart rate was high and legs were sore. Actually, the legs were still out on the bike course. No matter how fast I tried to go, the legs had met their limit. The muscles just wouldn’t fire any faster. What do you do? Adapt and re-focus. Adversity.

At the end of lap 1 on the run, I heard someone yelling my name. It was my boss and his wife. They drove up that morning and surprised me. It was really special. Didn’t anticipate seeing anyone I knew in the crowd.

Lap 2 it cooled off as the sun started setting. Stuck to the nutrition plan and kept the legs going. The volunteers were awesome. And the generic cola… Pure heaven although it wasn’t in the nutrition plan. Sorry coach. The chicken broth sounded good but didn’t sit well with my stomach. Eventually it got dark and lonely. There was no crowd. It happened to be the 125th anniversary of Clermont and there was a big carnival going on but once you passed through the area with the rides and the funnel cakes there was no one. Boy did a funnel cake sound good. 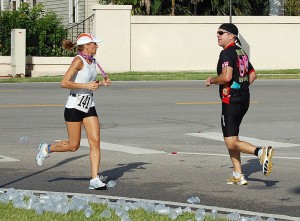 In the middle of the 2nd lap I had convinced myself that I could use some of Obama’s stimulus miles and skip the 3rd lap. That was the only time I started to lose mental focus. Remember what coach said. ‘Don’t quit’. From that point on, not a single negative thought. Kept the legs going. Slower than I wanted, but kept on running. Passing lots of people is unusual for me. For today though, nothing was stopping me.

The finish was uneventful. No crazy body movements across the finish line. I vaguely heard them say my name but I was already in the medical tent. The medal, ohhhh the medal. That is when it hit me. I was an Ironman. The banana at the finish line was the best banana in the history of the world. And the doctor asks you ‘how are you feeling?’ The correct answer is ‘good, thanks for asking’. The right answer was ‘ever see Tom Hanks in Castaway?’ They weigh you on some fancy scale before and after the race. I lost 0.8 pounds and 2% body fat. Validates the nutrition plan but a few burgers and some pizza will fix that…

They shouldn’t let you drive home

They should not let you drive home from an IM. I have no idea how I made it back to the hotel. Realized in the hotel parking lot that my lights were off the whole way home. Cops easily could have given me a DUIM. And yes, I stopped at McDonald’s and got a big fat burger.

I slept with the medal 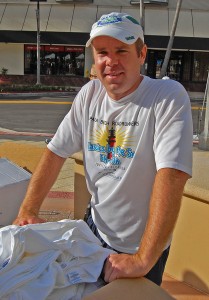 At the end of the day (well, night) I wanted to kill coach as I slept with my medal. Also very confident that if the jury of my peers were all Triathletes, they would have acquitted me. On a serious note, this would not have been possible without Rich Nixon. He gets all the credit. Speaking of killing people, the bike course inventor was nowhere to be found. Someone said he was sent to Gitmo for interrogation but it wasn’t confirmed.

Everyone keeps saying, ‘good job for your 1st Ironman’. First? Who said anything about a 2nd? Never again! Well, maybe 1 more…

The journey began 8 months ago with a dream I never thought was possible. I used to think Triathlon was an individual sport. Boy was I wrong. In no particular order I’d like to thank those that helped along the way: God, Fit2Tri, RSR, PBRR, Foxy and Co, Cycle Science, EM, LC, AB, JP, PKP, Dr. D, Dr. L, Dr. B, The Steinhoffs, Tyler, B&S, and NPB Pool Staff.

Today we have a guest column from Scott Maulsby, Marathon Man.Scott finished the 2009 A1A half marathon in 1:51:39 which works out to 8:32 a mile. Below is his report on the race and his feelings on running, training and our mortal coil.

Here’s the thing about Scott, he’s a runner — a hardcore runner. He’s got half a dozen marathons under his belt. Generally we shun runners. Oh, sure, he claims to be a triathlete and even finished his first half-Ironman in 2008. But, we all know that tri crap is just to impress the ladies. He’s really a runner.

So, why does he rank front page space on PBBT? Embarrassingly enough, he puts in more cycling miles training for a sprint-length triathlon than many of us pure cyclists put in working up to a century. Heck, he has run 257 miles the first two months of 2009. I’m not sure all the PBBT cyclists have 257 bike miles in the log book yet.

A1A Half Marathon in Ft. Lauderdale

Usually my anxiety prior to the gun going off comes from the fear of not finishing. For the most part, that is all I have ever wanted to do.

I started running as a pre-requisite for boxing and didn’t concern myself much with what the clock said at the finish line. Pretty much just focused on getting to the finish line. 2008 was a recovery year. Surgery on my spine/neck kept me sidelined for most of the year. Then it happened. I finished a Half Iron in November and a marathon in December and couldn’t figure out what was next… I was bored. I was slow. Maybe I should take up badminton and forget about running…