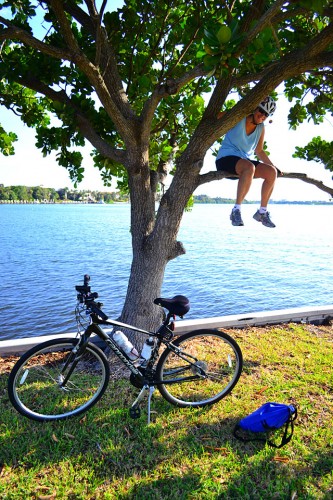 Osa said she had been slacking off while I was gone, but had gone riding three or four times.

When we got to the end of Hypoluxo Island on a perfect New Year’s Day, I warned her that she might want to slow down since her bike handling skills might have deteriorated. Sure enough, she didn’t pay any attention to me; if anything, she pedaled harder. Just as she saw seawall and water looming closer, she grabbed the front brake. I’ve done an endo and gone flying over the bars, but I’ve NEVER landed as high as she did. (You can click on the photos to make them larger.)

Fire departments don’t get cats out of trees 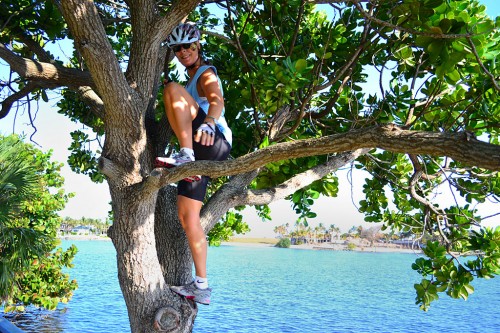 “Osa,” I explained. “We may have a problem. I was in fire dispatch one day when a 9-1-1 call came in from a distraught woman who said her kitty cat, Snookums, got out of the house and was perched at the very tiptop of a tall tree in the front yard. She was emphatically requesting a ladder truck be dispatched immediately to effect a rescue.

“The dispatcher tried, as gently as possible, to say that fire departments didn’t rescue cats from trees anymore. It’s just to dangerous for the firefighters. Finally,” I said, “the exasperated dispatcher snapped, ‘Lady, Snookums will eventually come down on her own. When was the last time you drove down the street and saw a skeleton of a cat in a tree?'”

Fortunately, Osa, like Snookums, managed to extract herself from the tree. I noticed that she was a lot more careful grabbing that front brake on the way home.

Every word of this story is true. One of my New Year’s Resolutions is to eschew exaggeration and tomfoolery.