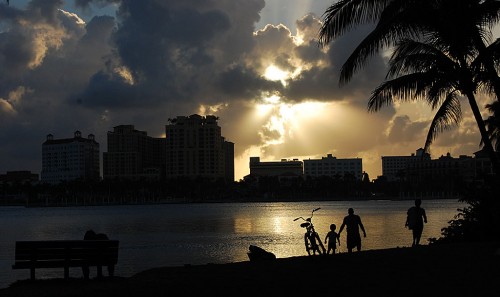 My riding partner, Osa, just got back in town after spending six weeks in Sweden visiting family, so we were both looking for a leisurely ride. We took before dusk to catch the full moon from Palm Beach. We paused just south of the Flagler Museum on the Lake Trail to catch a family watching the sun set over West Palm Beach.

We got to the Palm Beach Inlet just in time to see the last rays of sun light up the buildings on Singer Island. 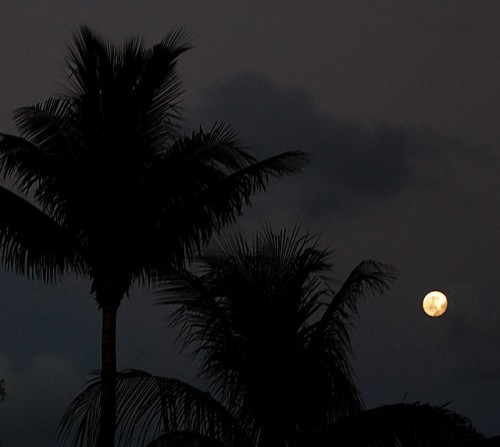 I have no idea if Drew Barrymore actually has a house directly to the east of the small park at the Palm Beach Inlet, but that’s what I’ve been told. I’ve never seen her there, not that I’d have a clue what she looks like. Anyway, here’s what the moon looked like over SOMEBODY’S house.

The Breakers in the moonlight 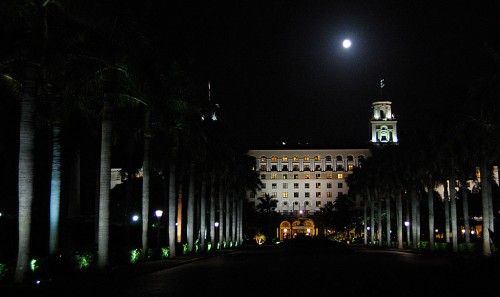 Osa and I must not have looked like much of a threat. The security guard at the checkpoint waved us right through to take a photo of the full moon over The Breakers in Palm Beach.

We pulled into the small park just west of the bridge over the Intracoastal on Southern Blvd. to shoot this West Palm Beach skyline.

Osa asked how I managed to hold the camera steady for these night shots (The Breakers was 1/15 second and the skyline was 1/4 second). I told her that in my prime, I could get a sharp picture with a 180mm telephoto at half a second (if I shot enough frames). The techniques for shooting a rifle and a camera are about the same: take a deep breath, let it out partially; visualize your heart beat slowing down; squeeeeeeze gently on the shutter release.

How to shoot with slow shutter speeds

I explained that we had pushed kind of hard for the last mile or so, so I needed to let my heart rate drop down before I could shoot. Then, I leaned up against a palm tree to demonstrate that turning a human bipod into a tripod would also let you shoot at a slower shutter speed.

What I didn’t count on was that I was standing on a mound of  fire ants. Very unhappy fire ants. Feeling your ankles light up is NOT conducive to good photography. I decided that I was done shooting for the night.

On the way home, Osa said, “THIS is why I live in Florida.” (Not the fire ants – the beautiful night ride.)