Regis Hampton, a bike shop owner in Floral City, FL, has been sponsoring a Full Moon ride on the Withlacoochee State Trail for years. I’ve done at least three of them.

The Withlacoochee trail moonlight ride will be Saturday, Oct. 11, at 7:00 pm.  Will start at the same place as always in Istachatta, however we’ve moved the bike shop to Floral City so no parts, lights or rentals from this location.  Lights, flashers and helmets please. Going to Las Lomas Mexican Restaurant. 26 miles round trip.
Regis 352-419-4809 or 352-799-4979

My son, Matt, and a friend from the office, Chuck, decided to take advantage of the great fall weather in Nov. 2003 to ride the Withlacochee State Trail, a 46-mile rails to trails in west central Florida.

Chuck and Matt were only looking to do about 50 miles, so Chuck got a motel room in Inverness, about the half-way point. That was going to be the bail-out spot in case anyone wanted to quit early. I was really hoping to get in a full century.

Matt and I started at the south end of the trail near Trilby and were clipping along at a great pace except that my gears were shifting all by themselves. It was like they were hunting between three cogs. Played the devil with trying to set a cadence.

About five miles down the trail, I was looking down trying to figure out what was going screwy when I noticed that a chain link looked like it was bulging out on every pass. There is a great bike shop about 10 miles out, so I figured that I’d drop in there and get it looked at.

That’s when we hit what’s probably the high spot (literally) of the trail: an old railroad bridge that goes over I-75. I had climbed about 20 feet when the chain parted. The good news is that I had bought a Park chain tool a couple of summers ago when I had broken a chain in MO. The bad news is that I had never used it. It wasn’t brain surgery, so the kid installed a new pin for me.

I got up the bridge about 20 feet then the chain parted again. OK, so the kid is a Unix administrator, not a brain surgeon.

This time he took out the link that was bent and tried again. Not only did it work fine, but it actually seemed to shift better than ever. While we were working on it, a very nice park ranger came by to see if we needed help. He carries a set of bike tools and spare parts and actually seemed disappointed when he found us making our own repairs.

Be patient, we’re going to get to the snake eventually.

We hooked up with Chuck in Floral City, had a great lunch and kept on trucking. 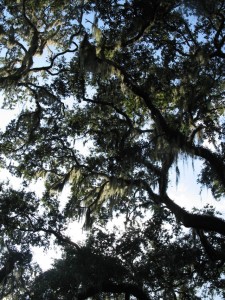 The trail goes through some fairly desolate country and some tiny towns. We didn’t see as much wildlife as I had on some other rides, but there were a few snakes, a gopher tortoise, something in the distance that was too big to be a squirrel and some of the biggest bunny rabbits I’ve seen this side of jackalope land.

When we hit Inverness on the return leg, Matt and Chuck decided they’d had enough fun. It was about 60 miles for Matt and about 50 for Chuck. I wanted to get in a few miles, although it was getting late and chilly, so my goal of a century wasn’t likely to happen. The trail is supposed to close at sunset, and I was afraid that they might close the gates where we had parked the car.

Matt and Chuck headed off to get Chuck’s car to pick up mine. Matt and I had GPSs programmed with waypoints along the trail and we both had Nextel radios to keep in touch.

Between the rapidly ending day and overhanging trees, it was getting dark enough that I had to turn on the my lights. I didn’t have to worry about traffic, so I was just running off my Schmidt hub. I kept my NiteRider in reserve just in case.

I hadn’t seen another rider in an hour and was in the darkest part of the trail when I decided to take a close look at my GPS to see which would be a logical pickup point to meet The Kid. Except for some frogs and an odd snake or two, there wasn’t much to dodge.

Out of the corner of my eye, I saw something mottled-looking stretched two-thirds of the way across the 9-foot trail. My brain told me that it was just some leaves that had been stacked up against a curvy crack in the blacktop to a height of about 2-1/2 inches, a width of about four inches and a length of about six feet (and that was just what was on the trail.)

My instincts, however, caused me to grab the radio and say, “Kid, I just passed something that was either a pile of leaves or a bleeping python. Either way, I ain’t going back to find out.”

Making me wonder even more about it was the fact that I don’t recall seeing anything obstructing the trail when I rode north and Chuck didn’t see anything like that when he rode the same stretch on Sunday. 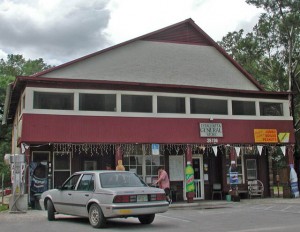 I decided that I’d try to hook up with the kid in front of a general store in Istachatta. When I got there, it was like a scene out of the Twilight Zone just before Rod Serling shows up. The general store was closed and dark. The few houses around were dark and quiet. The only sound came from some dogs howling in the distance.

“Yep.” He replied. “Just a couple of miles from the turn-off. Won’t be but a few minutes.”

I had my bike set up by the side of the road with all of the taillights blinking and the NiteRider headlight strobing away at a roadside sign. There was no way he was going to miss me.

“Kid,” I radioed again. “Do you have any idea what kind of sound a python makes slithering through wet grass? Well, I don’t either and I’ve seen enough of those movies to know that I don’t to look over my shoulder.”

“I didn’t notice that the battery in my GPS had died.” he replied, giving me much comfort. “I was wondering why the little arrow on the laptop wasn’t moving. I’ve changed the battery and figured out that I missed my turn. It won’t be long….”

That was easy for him to say. He wasn’t python bait.

Maybe I didn’t get a picture of the python, but here’s a picture of Matt with a shark we spotted along the trail.