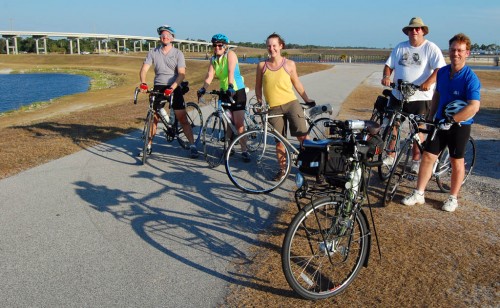 Six of us showed up for a Full Moon ride on the Lake Okeechobee Scenic Trail (LOST) Saturday night. There was (left to right) Son Adam and his wife, Carly; Reader in the Wild Mathilde; former co-worker George and newbie Jay. Jay, who is a golfer and a gym rat, was not only a LOST newbie, he was on his second bike ride.

We started out with a great tailwind

The wind was out of the south at 12 to 14 mph and we were headed mostly north, so life was good. It wasn’t hard to crank at 18 mph.

The group sorted out pretty quickly. Carly was on fire. She set the pace for Adam and Mathilde. George, Jay and I brought up the rear.

After a couple of miles, Jay either got bored with my descriptions of the lake or he was afraid he was going to go to sleep riding at our slow pace. He took off to try to catch up with the other three. Either he was a ringer who fibbed about his experience or he’s gonna make a great bike rider.

I have to confess: I’m slow

I stopped along the way to shoot a picture of a tree at dusk and George passed me.

Another one bites the dust

Just as I was catching up with George and getting ready to pass him, the Queen song, Another One Bites the Dust, started playing.

You can’t beat that timing.

I was getting hungry

I sent word ahead to the faster riders to go on ahead to The Office Bar & Grill at Nubbins Slough and order a sausage, pepperoni and mushroom pizza, figuring it would be ready by the time I got there.

That gave me time to enjoy another Lake O sunset. 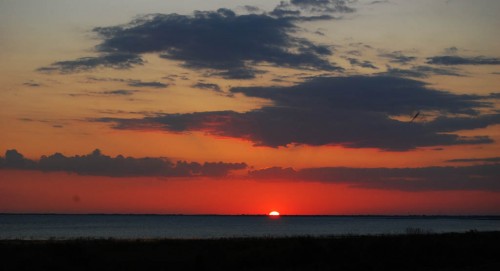 And, no, I didn’t get to see the legendary Green Flash this time either.

I pulled up in front of the Office to find some disheartened riders. The place was closed. We arrived at 8:05 and closing time was 8:00.

George said he wasn’t hungry and was going to head back because it was going to take him quite a while to make it back to the cars. He figured we’d probably pass him on the way back down the trail. The rest of us elected to head north to Taylor Creek for Gizmo’s Pizza.

[Note for anyone worried about what happened to George: he made it back to the trailhead 40 minutes before the rest of us. Fortunately for him, the bugs were no problem this trip. Otherwise we’d have found a George skeleton next to his bike.] 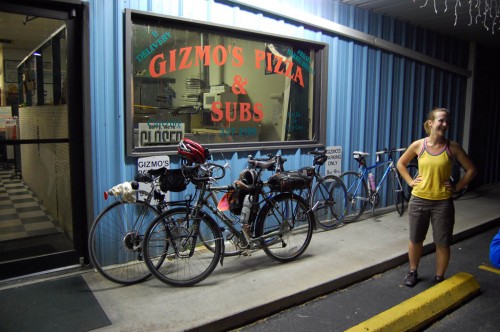 I didn’t want to take us four miles out of our way if THEY were going to be closed, so I gave them a call on my cell phone (they are one of only two pizza joints on my speeddial list). They said they were getting close to turning out the lights, but they’d stick around for hungry cyclists.

They made us a great pizza, kept us supplied with beverages and stuck around past normal closing time to make us feel welcome.

[NOTE: Bad news. I stopped by there recently and found they are no longer in business. There’s a new sandwich shop in their place. I haven’t tried it yet.]

I tell folks that bugs can be brutal around dusk and that eye protection is a good idea. Adam was certainly ready.

As it turned out, the dry weather has kept the bug population down for the last two Full Moon Rides we’ve done.

The headwinds were brutal

That great tailwind northbound was a terrible headwind on the way south. I was hoping the wind would die down at dusk, but I think it might have even increased.

I was in my middle ring in the front and the second and third-lowest gears in the back spinning away at 80 or 90 rpm. It was like 21 miles of hill climbing without a break. Everybody just got into their own groove.

I was bringing up the end, as usual.

What is that crazy woman doing?

When I pulled into the lock at Henry Creek, the first thing I noticed was Mathilde jumping up and down and gyrating wildly like the metal grate was electrified.

When I got closer, I discovered why: the lake has been so low that the locks have been closed to boat traffic for about 18 months and the concrete lock chambers are almost empty except for a couple zillion very vocal frogs.

The sound of all those frogs echoing off the concrete walls was quite musical and impressive. It was almost synchronized and with a strong beat, so she was moved by some primitive urge to dance. (I THINK that’s what she was doing. It might have been a strange medical condition that’ll show up on House next season.)

As impressed as I was, the topping on my pizza must not have been the same as Mathilde’s because I was not quite moved to gyration. Maybe it was more generational than gastronomical.

Even thought the light was miserable, Son Adam managed to capture a bit of the moment in the video above.

All in all, it was a great night with some nice folks. You can’t beat that with a stick.

3 Replies to “Doing the Frog Dance under the Full Moon”