An old high school friend sent me a link to a story in my hometown Cape Girardeau, MO, newspaper.

Howard Bock was dead at 87

It was a longish obituary by most standards because he had a much more active life than I ever knew.

The quiet-spoken man had been an engineer gunner on B-26s in World War II. You would never know from talking with him that he had he been awarded the Distinguished Flying Cross, five air medals, American Defense Medal and campaign ribbons (Battle of Europe, Battle of the Rhineland and Battle of Ardennes-The Bulge).

He had been a teacher, coach and administrator for 32 years.

His wife was my Cub Scout den mother

The Bocks lived on my newspaper route (on the left side of the road on a downhill stretch; they didn’t have any special requests, so I could fling and wing without slowing down). Jo Ann Bock, his wife, was my Cub Scout den mother.

I fell in love with photography

When I was 12 years old, our family took a vacation / business trip to Florida. (Dad was looking for construction equipment to buy.) He gave me a Kodak Tourist II folding camera and I fell in love with photography.

Debate, law and politics looked in my future

When I was a high school freshman, I discovered the debate club. My partner and I were undefeated for the year and I thought law and politics were in my future. (One of these days I’ll write about how I discovered that I wasn’t a good politician.)

Mr. Bock approached me one day and said that he had heard that I was interested in photography and wondered if I might like to join the newspaper and yearbook photo staffs.

I don’t know that I gave it much thought, but I joined the staff and learned how to process film and make prints in a tiny darkroom on the second floor down near the science classrooms. There wasn’t enough room to swing a cat, but we photographers had a key to the darkroom and it was our special place to hang out between classes. 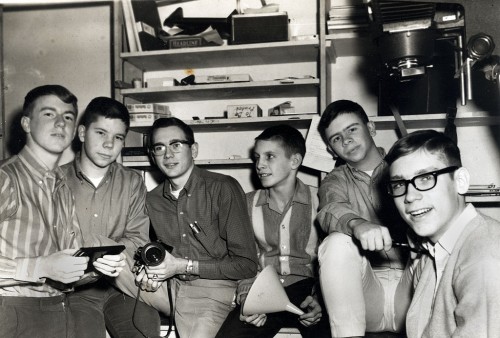 It wasn’t long before I was freelancing for the local papers and discovering that being a photographer doing exciting things was more fun than the prospect of doing dull lawyer research.

Thank you, Mr. Bock. My thoughts are with your family.

3 Replies to “Howard Bock: A Man Who Changed My Life”