Moni, a phred from Oklahoma, said it was 52 degrees with 30 mph winds gusting to 50. She was planning on a ride and was curious if any of the rest of us were going to hit the road. 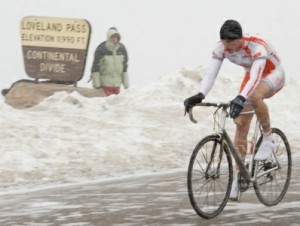 Icebikers are a whole different breed

I swiped this picture by Michael Oryl from the Icebike site, “dedicated to winter cyclists who brave ice and snow and cycle for transportation, recreation or competition.”

I had to steal the photo because I didn't have anything like it. I don't even have a point of reference for the picture.

After initially posting  that I was considering a ride this afternoon, I had to send the following confession:

I STARTED to go out riding this afternoon when the temps went above 66 degrees, but then it clouded over and looked like snow.

I put on my bike shorts, pulled on knee warmers, topped that with leg warmers and tights. I put on two pairs of socks underneath my Shimano Sandals and covered those with two layers of plastic newspaper bags. I had on my normal bike gloves covered by woolen mittens.

Unfortunately, just as I headed out to my bike, I found out that I couldn't walk with all that gear on, pitched forward on my face and twitched like a dying cockroach until my wife came out and helped me up.

It's probably a good thing.

The descent leaving the driveway – from 14 feet above sea level to 12 feet  – probably would have created wind chill that would have frozen my eyeballs.

Maybe tomorrow will be warmer. You just can't take too many chances.