I was riding the new section of the South Lake/Lake Minneola Scenic trail that starts in Clermont, FL, and ties in with the West Orange Trail recently. 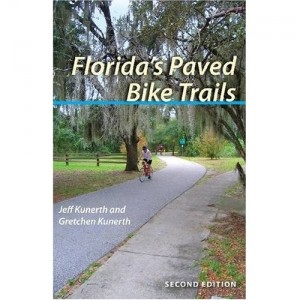 When I got to the bike shop at the Killarney Trailhead, I asked if there were any maps available of the new part. I was told that the only thing he had was Florida’s Paved Bike Trails, a book by Jeff and Gretchen Kunerth.

Frankly, I wasn’t much interested in shelling out $16.95 (plus tax) for yet another probably out-of-date bike guide, particularly since I was going to have to hump it on the back of my bike the rest of the day.

There were lots of trails new to me

Paging through it, though, I noticed lots of trails I had never heard of before. Some of them had enough miles to make a trip worthwhile and some sounded like they’d be a lot of fun.

I decided it was worth the money and the hassle.

I gave it a quick read while I was in the eye doctor’s office for an annual checkup. My next challenge will be to see if I can tie together a multi-day trip that will let me hit as many trails as possible.

Overall, I’m not sorry to have bought the book, although It’s available through Amazon for less money (and you won’t have to strap it on the back of your bike).

I recognize that someone who buys a book about bike paths may not feel comfortable riding in traffic on the road, but the authors are just a little too timid for my taste. 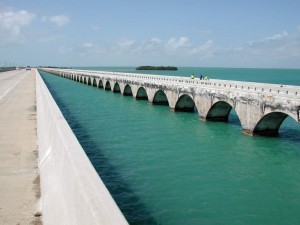 In talking about riding over a bridge in the Keys, they write, “The first bridge is narrow and hazardous, a challenge only experienced riders should attempt. The shoulder is just six feet wide, and the trucks that rush by come harrowingly close to cyclists.”

I’d kill for a six-foot shoulder most places.

I’ve ridden the stretch of highway they’re describing twice. Only once did I have a a vehicle invade my comfort and awareness zone. A bus coming up from behind was meeting an oncoming truck, so he had to stay in his lane, which still gave me a good four feet of clearance. I didn’t feel threatened, just aware of a tighter pass than usual for the day (and I couldn’t fault the driver for it).