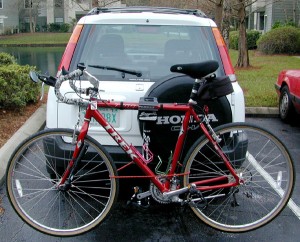 I’ve been thinking about racks – bike racks – lately. I was cleaning out my storage unit and came upon one of those strap-on kinds in good shape. It went to Reader in the Wild Mathilde. It was better than taking the front wheel off her bike and wrestling it into her car when she needed to transport it.

I never trust them for good reason. They come loose and drop your bike on the ground.

Foodie Jan Norris and I decided to ride the northeast side of Lake Okeechobee before the dike was paved. Since we weren’t sure how it was going to work out, we left my car at one end and put our bikes on her cheesy strap-rack to go to the start. I added a couple of wraps of bungee cord “just in case.”

We were tooling down U.S. 441 at something that felt just shy of the speed of light.

After about 10 miles, I looked in the passenger side rearview mirror.

I didn’t see my bike

She did a bootlegger and headed back up the road to see if we could spot a twisted bike carcass on the side of the road. I could only wonder how many cane trucks had already ground it to dust. I was already planning in my mind what the replacement would be.

See bottom of the post for an old memory that just popped into my head. It is only barely connected to this topic, so I’ll bury it at the end.

Now, back to our normally scheduled program

After we had gone several miles, I told her to pull off on the shoulder. I walked around behind the car to see that my bike had slipped off the rack – which put it below the line of sight – but the bungee cord had sort of held it on. Every so often it would bounce off the pavement, resulting in a tacoed wheel and a sanded-down pedal.

Son Matt dropped my bike, too

Not long after that, Son Matt and I were coming back from riding the West Orange Trail near Orlando, FL. When we stopped to make the turn into his housing development, my bike fell off his strap-on rack. If it had happened five minutes earlier at Warp Speed, it would have caused havoc on the highway.

I was ready for something safe and strong

My first hitch-mounted rack was made by Swagman. It was similar to the one pictured at the top of this posting. 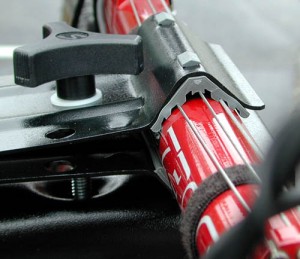 What I liked was that the bike was held on to the rack by a bar across the top that screwed down. Unfortunately, I  grew to hate how long it took to screw and unscrew that top, particularly in the dark at mosquito o’clock.

Secondly, it had a tendency to drag (follow the link to see the solution.)

Enter the Yakima KingPin 4 and 5 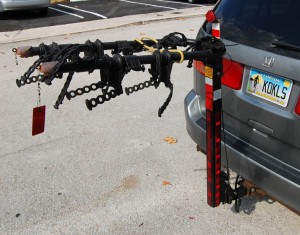 I liked the design of the Yakima Racks better.

How about the Yakima SlickROC 4? 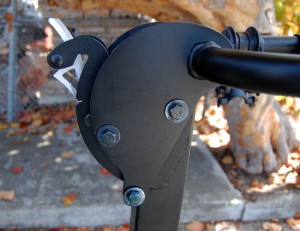 www.chainlove.com has put this model on sale twice recently. I bought one for Son Matt for his birthday and one for Son Adam to reward him for completing his first triathlon.

The SlickROC is similar to the KingPin 4, except that it comes with a Deadlock cable locking mechanism to keep your bike safe from honest people and it has a more convenient way to swing down the arms without pulling a pin.

In the long run, it may not hold up as well as a simple pin, but it’s more convenient to use.

He sold us a hitch receiver extension (and even trimmed off 3/4″ inch and painted it). Problem solved.

Where have I bought my Yakima Racks?

However, I did send them a crankygram with my first order:

When I ordered this item on March 29, I took advantage of the 10% in-store discount, but I specifically asked if there were any sales coming up. The answer was no.

I should be happy with the 10%, but it torques me off a bit to get an email from you two days later – before the rack has arrived – telling me that I could buy it for 20%. off now.

Great point and thanks for contacting us.  I’ve refunded your Visa card an
additional $20 which will give you the effective sale price of $180 on your
KingPin.

You can’t fault that for customer service

You have to catch chainlove at the right time

The SlickROC4s were ordered from chainlove.com. (Their ad is at right.) The only catch is that they put up specials all day long for specific times or until the product is sold out. You have to watch for their alerts to snag stuff; you can’t just order from a catalog. Still, their prices are good.

Here’s the major digression I promised

When I was about 10 years old, dad was building a road down in the Southeast Missouri Bootheel. Gravel for the project was delivered in hopper cars to a railroad siding, where it was unloaded into an underground hopper, lifted by a conveyor belt, dropped into a dump truck and hauled to the cement plant at the job site.

Dad would let me crawl under the hopper car with sledge hammer and knock out the pin that held the chutes in place. The big chute doors would burst open and tons of gravel would come flying out. The best part would come with the car was empty. Dad would give the car a couple of bangs with a dragline bucket to get the last of the load out and then, while I was stretched out on my back under the car, a guy in a tractor would push the line of hoppers up one space so I could repeat the process.

Obviously, I was told not to crawl out while the train car was moving.

It was perfectly safe 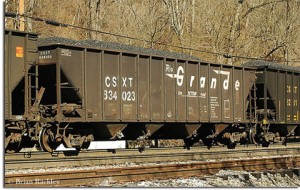 Of course, looking at it from today’s perspective, I guess I could have mashed my finger with the hammer, been knocked unconscious by the chute door opening suddenly, been buried in a dark pit under 50 tons of gravel until I rode – probably in pieces – up the conveyor belt to be dropped into a dump truck, where I would be mixed up into a load of concrete and become part of a state highway.

But, since none of that stuff happened, it was a heckuva summer for a 10-year-old.

How did cane trucks make me think of trains?

One weekend before we left to go home, I put a whole line of pennies on the main train tracks that were feet away from our siding. I envisioned coming back on Monday and finding them all squished paper-thin as souvenirs I could share with my buddies.

Much to my disappointment, the pennies not only weren’t flat. They weren’t there.

Dad explained that the high-balling freights would mash the copper pennies as flat as tin foil and they would be effectively welded to the train’s drive wheels. (Putting them under the hopper cars worked great, by the way. I bet I still have some of those pennies somewhere back home.)

That’s what I thought had happened to my Trek; it had been mashed to Trekfoil and was stuck to the bottom of some cane truck headed to the sugar mill.

Folks ask me, “Aren’t you afraid to ride on the road?”

I think kids who grew up in the 50s and 60s and weren’t taught that the world is a dangerous place are less afraid than their more-protected children and grandchildren. Kids today aren’t allowed to do the kinds of things we did and, mostly, survived every afternoon.

Of course, our generation was taught that we could survive a nuclear explosion just by ducking and covering under our school desks.

10 Replies to “Bike Racks I Have Known: Yakima and Swagman”