That was the common graffiti in St. Louis gas station restrooms in the 60s, when the solution to pollution was dilution and raw sewage was pumped directly into the Mississippi River to become someone else’s problem downstream.

The good folks at Cape Bicycle dug through their shelves and came with a replacement left shifter and got me back on the road late in the afternoon. (See yesterday’s post.)

While there, I was really impressed with a Surly Long Haul Trucker touring bike on the floor. It’s highly thought of by the phreds. I can see why. It’s a lot of bike for the money.

Time for a test drive

After getting a $20 flu shot, I just barely had time to get in a 12-mile ride before a cold front moved in bringing rain with it.

I used the Cape Recreational Trail to get to the south end of town, where I took city back streets to get down to the site of the Old Mississippi River Bridge which was torn down when a new bridge was built in 2003. It was a shame that the old bridge couldn’t have been left up like the Chain of Rocks Bridge in St. Louis.

I got there just in time to see a barge push by.

A quick ride to the riverfront 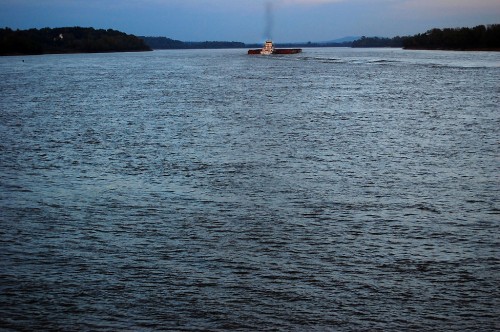 I hurried to get to an opening in the seawall on Water Street, but the barge was moving faster than I could. I had to content myself with a quick shot before it made it past Cape Rock.

The Mississippi River has always been a special place for me. The ocean is neat, but I can sit and watch the river flow by for hours.

As a cub reporter, I had to interview the guy who had been reading the river stages in Cape for 100 years, or so it seemed. The poor fellow had probably been interviewed by two dozen cub reporters like me.

What have you learned about the river?

“If a little boy pees in the river in St. Louis, the river will rise in Cape Girardeau.”

The Southeast Missourian was a pretty conservative paper in those days – one editor would even censor Ann Landers columns – so I’m not sure THAT quote saw print.

Even though downtown Cape has been in a serious decline since the seawall was constructed, the riverfront is a popular stopping place.

An impressive set of official murals grace the front and back of the wall, but chalk artists have added their own decorations. 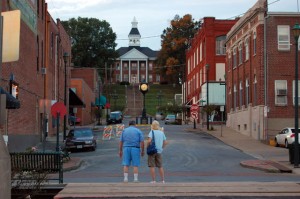 With the sun setting, a couple leave the river front and head out toward the Common Pleas Courthouse, built in 1854.

This was just a quick hit. I’ll return to historical downtown Cape and its river later.

Thursday is going to be a non-biking day. Bro Mark and I have to go over to Kentucky Lake to check on our mother’s mobile home that took some limb hits when Hurricane Ike blew through.