Bro Mark, shivering in St. Louis, sent me this picture and message this morning. 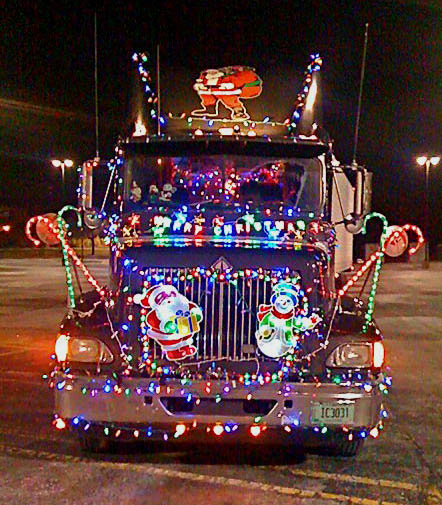 The iPhone doesn’t do so well in low light. This truck was in the Galleria Shopping Mall parking lot last night.

I stopped and asked the driver if I could take a picture of his truck. He was from the south and was very nice.  Said he just wanted to be sure that Santa saw him this year.

The inside of the truck was lit up with just as many lights.  He was going to wait out the snow/ice storm that was heading our way and the snow up north that had the roads shut down.

The photos that I took from the side turned out too blurry to even send.

If I saw this rolling down the highway, I would HAVE to follow it, I would just have to.

There are some folks who swear that I have almost as many lights on my bike, but I’ll deny it.

I wish I did, but I have to confess that I’m a few bulbs short of a string.

In a comment below, Bro Mark walks down memory lane.

I had a great old blue Volvo station wagon a few years back and I would take an artificial tree and lay it down on the roof rack and then decorate the tree. I wired ornaments to the branches so they wouldn’t fly off as I drove down the road. It also had a full set of lights strung on it as well. I powered the lights off a converter that plugged into a lighter.

It was great fun to drive down the highway at dusk and as I would approach a van that had kids in it, I would throw the switch and light the tree. You’d never guess that kids noses could flatten out so wide against a car window. I always got the thumbs up from other drivers as I drove down the road.

Ken may have a photo of the tree since the car broke down one Christmas on the way home when he was visiting here. It would be unlike him to have NOT taken pictures.

[ED Note: Indeed, I did take pictures while you were abandoning the Volvo at a gas station along I-55 after the engine blew. “Oil? Don’t cars COME with oil when they’re new? You mean you have to change it after three or four years?”]

Later I learned that I was an idiot for using regular lights. Apparently there was some risk of electrocuting myself with the standard 110 volt lights. Electrocution, schmuckticution…I might have to do it again with the new car next year, because it was so much fun. 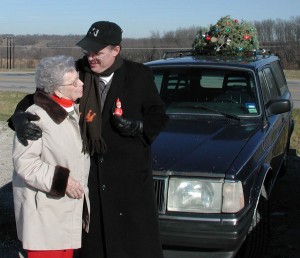 [Ed Note: For the record, it really DID look cool at night. As far as learning that he was an idiot for using AC power to light up the tree, the Idiot Train pulled out of the station a long time ago.

If you don’t believe that, check out one of Bro Mark’s other escapades.

Seems like he has this thing about lifting his bike up in the air, probably to demonstrate how light it is.

After a ride, we decided to check out Tower Rock, which is normally surrounded by swift-moving Mississippi River waters. Because of a drought, it was possible to walk out to the rock for the first time in years.

Let the pictures speak for themselves. Click on the thumbnail to see the whole story.