I like back roads. You never know what you’re going to find. When the boys were little, we took the less-traveled roads from West Palm Beach, FL, back home to Cape Girardeau, MO. Our path took us near Tuscambia, AL, where we stopped to visit Helen Keller’s home. 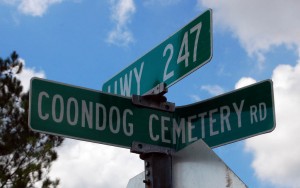 We probably had a tour book something like this one that led us from there to the Key Underwood Coon Dog Memorial Graveyard.

Finding it is an adventure

Trust me, anytime directions say “follow the signs” something is gonna get interesting.

View Coon Dog Graveyard in a larger map
You may need to load the larger map so you can zoom out far enough to get your bearings.

We were pulling a small utility trailer

We were in a small Mazda 626 with two adults and two squirmy – “He’s Looking At Me” – kids and pulling a small utility trailer behind us when we made the turn onto a narrow gravel road. It was getting late in the afternoon and the road seemed to go along forever. 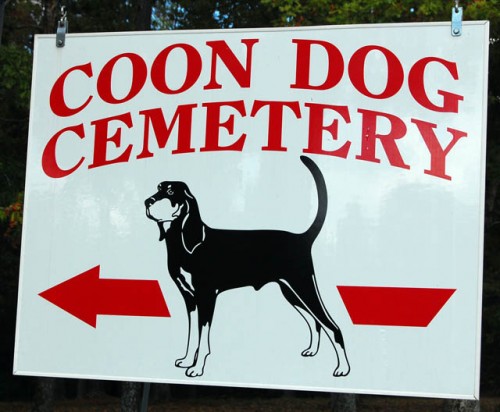 I looked in the rearview mirror and saw a cloud of dust about a tenth of a mile behind us. I didn’t hear Dueling Banjos, which made me feel better, but figured I’d keep an eye on the mirror just in case.

We finally saw the sign and made the turn into the cemetery.

While the wife and kids piled out of the car, I noted that the following cloud of dust was gone, but that the car hadn’t passed us. Oh, well, he may have pulled off. 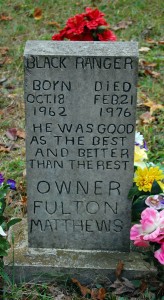 The kids amused themselves by wandering around collecting chiggers and reading the stones.

Troop, owned by Key Underwood, was the first dog buried in the graveyard. On Labor Day, 1937, after being hunting companions for 15 years, it was reported that Underwood wrapped Troop in a cotton pick sack, buried him three feet down and marked the grave with a stone from an old chimney.

About 30 minutes after we had gotten there, a car pulled in and a couple got out and walked up to us.

“We saw you pulling that trailer behind you and thought you might be conducting a burial, so we wanted to give you a little privacy,” the man said, respectfully.

We thanked them for their consideration and assured them that all of the folks who had arrived at the graveyard would be leaving with us. 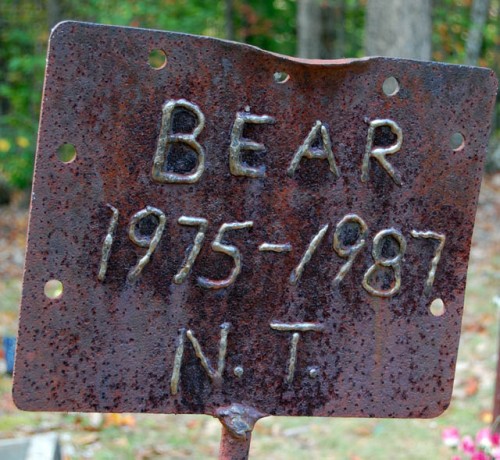 Some grave markers are commercial versions with professional sandblasted lettering like you’d find in a human cemetery, but most of them are homemade and reflect the personality of the dog and his / her owner.

Some are carved out of wood and are rotting away. Others are simply names gouged into cement or stone.

Bear was memorialized with a welding bead spelling out his name and dates on a rusting piece of sheet metal. 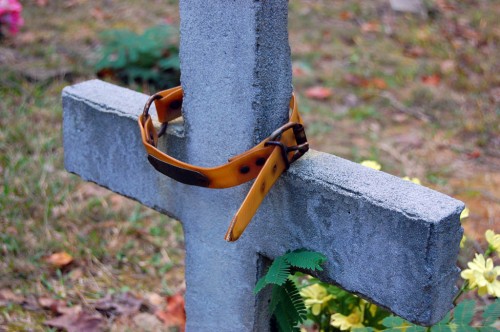 Underwood told a reporter that he had no intention of establishing a coon dog cemetery. “I merely wanted to do something special for a special coon dog.”

There are standards and rules

The hunter told columnist Rheta Grimsley Johnson in 1985 that a woman from California wrote him wanting to know why he didn’t allow other kinds of dogs to be buried in the Coon Dog Cemetery.

“You must not know much about coon hunters and their dogs, if you think we would contaminate this burial place with poodles and lap dogs,” he retorted.

“We have stipulations on this thing,” William O. Bolton, the secretary/treasure of the Tennessee Valley Coon Hunters Association, and caretaker of the Coon Dog Cemetery was quoted on the organization’s web page. “A dog can’t run no deer, possum — nothing like that. He’s got to be a straight coon dog, and he’s got to be full hound. Couldn’t be a mixed up breed dog, a house dog.”

It’s a beautiful and peaceful place 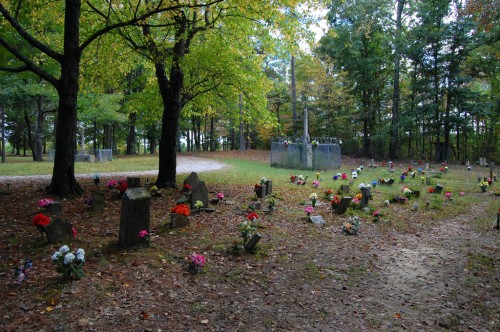 The cemetery is very well taken care of. We were a little disappointed to see that almost every grave was decorated with plastic flowers that looked out of character for the place. We assumed that they had probably been placed there as part of the annual Labor Day celebration since we visited in October and they looked fresh.

The celebration runs from 1 to 4 P.M. and includes music, dancing, food and a liar’s contest. Official Coon Dog T-shirts and camouflage caps are available.

The gravel road has been paved these days. If you are interested in going there, drop me a comment and I’ll give you the GPS waypoint for the place. I’ve seen at least three different locations shown for it on different maps.

Bug spray is advisable (mosquitoes were heavy late in the afternoon) and keep an eye out for ticks.

Oh, and if you see a car pulling a trailer turn in, give them a few minutes of privacy.