My brother-in-law, John Perry, is one of those guys I really admire.

If the world ever goes to hell in a handbasket, John and the cockroaches are going to be the last ones standing. There’s nothing he can’t build and hardly anything he can’t fix. 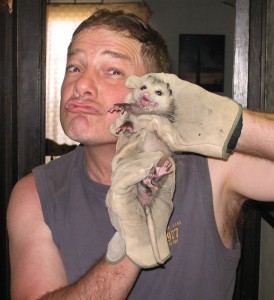 John can fix anything

We save up all of the stuff we either don’t know how to do, don’t want to do or would panic trying to do and beg John to leave Jackson, MO, to bail us out.

When he came down to remodel our kitchen, he wasn’t all at bothered when he came eye-t0-eye to a family of possums living under the kitchen sink.

Note: no possums were injured in the remodeling project. I think John’s shorts may have needed another pass through the washer, though.

Wyatt came with him

His son, Wyatt, came with him this time. Foodie Jan Norris set them up with a neighbor for a father’s day fishing trip on the Coconut Rum II because they spent most of the week remodeling her bathroom.

Lots of fish going back home

John and Wyatt had a great day on the water. They caught (and released) a whole slug of fish and they brought back plenty to pack in dry ice and ship back home to Jackson.