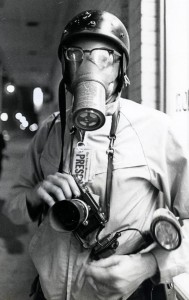 Every May 4, I can count on getting a message from John J. Lopinot,  friend and former chief photographer at The Palm Beach Post.

The subject line is always “Never Forget.” Sometimes that’s all it says. That’s all it needs to say.

On the morning of May 4

On the morning of May 4, another photographer and I decided to leave Athens, OH, where I was chief photographer for The Athens Messenger, and go to Marietta, OH, where there was an army-navy surplus store that sold gas masks. From there, we were going to drive to Kent State, where things looked like they were heating up.

We didn’t make it to Kent State

On the way to Marietta, we heard a radio bulletin  that there had been a shooting at Kent State University and that there were fatalities. The first broadcast made it sound like students had killed troopers. In fact, the guardsmen had killed four students and wounded nine others.

We decided that we should still get the riot gear, but we should get back to Athens in case violence broke out there.

An Athens County Deputy pulled me over

Shortly after we had crossed over into Athens County, a deputy I knew (fortunately) pulled us over. “We got a call from a surplus store over in Marietta that some student hippy-types were buying up riot gear and heading to Athens. You wouldn’t know anything about that, would you?”

I confessed that “that would be us.”

“Do you know anything I should know?” he asked.

“Just being ready,” I replied. “Your guess about what’s going to happen is as good as mine.” 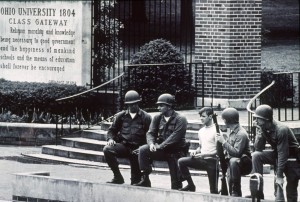 That night in Athens

Thousands of students assembled that night on the Main Green. Student after student took to the microphone and the crowd looked like it was going to turn ugly.

Just then, a couple burst out of the shadows, seized the mike and said something to the effect of “We were at Kent State this morning and saw the shootings, saw the bodies, and my friends and I said we had to split up and make it around to all the other schools to say, “‘You don’t want that to happen here.””

They were gone as quickly as they had arrived. I never did find out who they were or if they had actually been at Kent State. Their sincerity, though, quickly changed the mood of the crowd. Slowly, students drifted away. I didn’t need my gas mask after all. 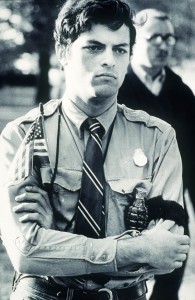 During that time, though, there was some kind of march, protest or building burning almost every night. What is exciting at first gets really tiring after a week. I swore that I was going to go crazy if I had to hear one more rendition of “Give Peace a Chance.”

Everybody else was just about burned out, too. The students were just going through the motions. I thought it had hit the point where there was going to be one last march to the university president’s house and then the movement would have lost its steam.

Suddenly, though, students who had been drifting back to their dorms returned saying that the Main Green was surrounded by cops, many from surrounding towns. Instead of letting the students go home, they were turning them back to the demonstration. 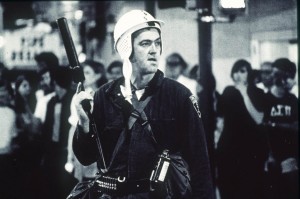 Sgt. Beasley, an Athens cop with whom I had a pretty good relationship saw me standing 50 or 75 feet away at the basement entrance to the Ohio University Post newspaper. He waved at me, grinned and then sent a tear gas grenade skittering down the street into the entrance to The Post.

I waved back, grinned and pulled on my gas mask and went down into the basement to lead out the gassed Posties. 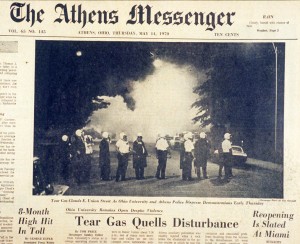 They used up every toy they had

Before the sun came up, every piece of ordinance they could fling, launch, spray or shoot had been used up. There were trees on the main campus with holes an inch-and-a-half around and half an inch deep left by tear gas projectiles that were fired straight ahead instead of being aimed up for maximum dispersal. It’s a wonder nobody was killed that night.

We were living in a ghost town

The decision was made to close the university and send everyone home as quickly as possible. Students were given the option of a pass/fail grade in their classes.

[ Personal note: I had 10 hours of independent studies classes I had every intention of finishing, so I opted for an incomplete in the courses, instead of taking the pass / fail deal. That came back to bite me when I took a job in Gastonia, NC, before the end of the next quarter. I’m still 10 hours short of a BFA. That doesn’t keep some poor student from OU from calling me every year asking for money. I just say, “Let me tell you a long, sad story….”]

With powdered tear gas still falling from the tree leaves, students descended on the bank where Wife Lila worked as a teller. The bank was less than a block from the Main Green of the university, and since students had been told to leave town, they were lined up out the door of the bank and down the sidewalk .  The line was continuous from opening to closing.

From 9 AM to 3 PM, three tellers did nothing but cash checks and close accounts…  and breathe teargas.  Since the doors were open all day, there was no way to avoid it. Lila came home with red, stinging eyes that barely opened and a nose that burned for days. I’ve never seen her so fried. 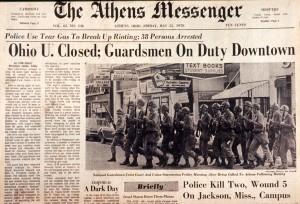 By nightfall, we were living in a ghost town.

I still get nostalgic for the smell of tear gas in the springtime. But, 40 years later, I cringe when I hear “Power to the People” or “Give Peace a chance.” Nice sentiments in those songs, but I heard them sung too many times by too many naive kids.

[Another personal note: I was just as worried about being drafted as the next guy. I didn’t breathe easy until Dec. 1, 1969, when I won the most important lottery of my young life: my March birthday came up Number 258 in the Draft Lottery. One of the guys in my dorm was Number 7. He packed up that night and left town. I never knew what happened to him.]