Foodie friend Jan Norris asked if I’d like to join her and some friends from New York in a bike ride in Palm Beach.

Given a choice of working around the house or going on a bike ride with some new folks, it didn’t take long to make a decision.

Meet at the Biba Hotel

Jan was going to drive down with two extra bikes. My assignment was to ride two miles from my house with a spare helmet and meet Bob Keller and Laura Hynes at the Hotel Biba just down the street from The Palm Beach Post (our former employer).

The Hotel Biba was known as the Mount Vernon Motel back in 1973 when we stayed there until we could find a place to rent. Even it those days it had a reputation as a hot-sheet motel, but the price was right and it was close to the paper. Not long after that, it became a true no-tell motel frequented by extremely friendly ladies of the neighborhood.

Today it’s a little more upscale. They rent by the day, not the hour. 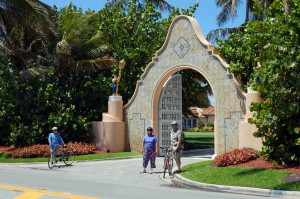 No Palm Beach trip would be complete without stopping to pose for a picture  in front of the gates to Mar-a-Lago, the former Marjorie Merriweather Post estate, now a resort owned by Donald Trump (actually, he owns 51%; ex-wife Ivana managed to hang on to 49%).

Laura, far left, is probably keeping her distance from Jan because she’s heard the story of Jan’s first bike ride on Palm Beach. Jan, who has a tendency to overheat (that’s like saying Joe Biden has a tendency to misspeak), lost her lunch near that spot, an act that has ever since been deemed “Doing the Donald.”

Riding with Yankee tourists is different 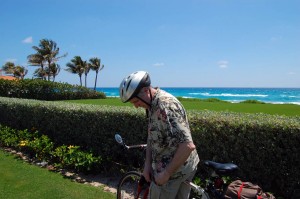 I pick up a fair number of new riders: friends of friends and the like. Most of them live down here, though and are used to seeing our foliage and styles of architecture.

Just north of Mar a Lago, when the road comes close to the ocean for the first time, Bob put on his brakes so hard that I was almost sure I saw the tires smoke.

Even for a semi-Floridian, I had to admit that the view was spectacular. The water was as blue as I have ever seen it and the 18 mph winds were kicking up beautiful lines of waves.

Riding with Yankees DOES have benefits. I would never have stopped if Bob and Laura hadn’t been along.

Another Only In Florida Moment 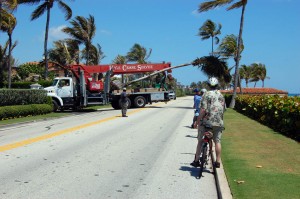 For some reason, traffic was unusually heavy. Maybe it was because drivers were using A1A as an alternate to West Palm Beach’s Flagler Drive, which is blocked off for SunFest.

We were cranking along at a reasonable pace (for Yankee tourists) when a workman stepped out into the roadway to stop traffic. Seconds later, a truck transporting a huge palm tree backed up into the street.

The truck drove south a few hundred feet and then pulled into a driveway on the other side of the house.

I don’t know if that means that the homeowner rotates his foliage like we common folks rotate our mattresses or if the driver had pulled into the wrong driveway initially.

In Palm Beach, either could be likely.

We turned around at the Palm Beach Inlet

When Jan suggested that Bob and Laura fill their water bottles with chilled water from the drinking fountain, I chimed in with my normal riff about Town of Palm Beach residents being able to wave their ID cards at a sensor and, if their property taxes were paid, get an Evian upgrade.

This from a New Yorker, no less. And folks wonder how Bernie Madoff was so successful. 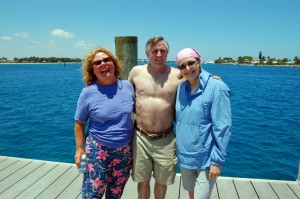 Bob shed his shirt to take advantage of the great weather. When we started to get back on our bikes, we warned him that it used to be against the law to be shirtless in Palm Beach if you were more than X number of blocks from the beach. We weren’t sure that it still wasn’t.

Those New Yorkers are fast on the uptake. After being burned on the designer water dispensing fountain, they weren’t about to believe us on this. It turns out that we weren’t stretching the truth for a change. About 30 years ago, it was big news when shirtless jogger Allen Deweese was arrested because such actions offended the delicate sensibilities of Palm Beachers.

From the court documents:

On November 19, 1979, Deweese was arrested for lewd and indecent exposure. His offense consisted of running on a public bicycle and jogging path in the Town of Palm Beach without a shirt. This conduct allegedly violated section 21-48 of the Palm Beach, Florida, Code which provided:

It shall be unlawful for any person to walk, run, jog, ride or otherwise be conveyed over or upon any street, alley, sidewalk, roadway, thoroughfare or other public place in the Town of Palm Beach with the upper part of his or her body uncovered. This Section shall apply to all places within the Town except private residences and their appurtenant grounds, public bathing beaches, except that females may not wear or appear in topless bathing suits or similar outfits on any public or private beach or in any public place within the Town.

The law was found unconstitutional

It’s now safe to be shirtless in Palm Beach. At least for males.