It’s funny how often we look at things without seeing them.

I’ve been riding the Lake Trail in Palm Beach since the 1970s and have stopped at the Palm Beach Inlet on the north end of the island scores of times.

Who was Murray Horowitz?

Several years ago, a park bench with a memorial plaque on it was installed at the Inlet park.

I’ve rested on that bench many times, but never knew the man nor anything about the quote on the sign, “Love others and appreciate what you have.”

Google didn’t give me the definitive answer, so I turned to former colleague and Palm Beach Daily News Publisher Joyce Reingold.

She quickly sent me a copy of a news story that had run in the island’s newspaper, The Shiny Sheet (called that because it’s printed on a paper stock that keeps the ink from rubbing off on rich fingers, at least the few that are left after Bernie Madoff slashed and burned trust funds). The story said that Kenneth Horowitz had just donated money for a water fountain for people and dogs, the second one he had funded in memory of his father.

Key parts of the Horowitz clip

The feature [a water fountain which also provides dogs with a drink] is a sort of chaser to the Murray Horowitz Memorial water fountain installed nearby a few years ago. The idea was for those who run, jog or walk to take a breather. Now, their dogs can, too.

Both were made possible by Palm Beacher Kenneth Horowitz, who said the fountain’s inspiration was his father. Murray Horowitz died when Ken was 21. A never-forgotten kernel of his dad’s wisdom appears on a plaque at the fountain and has drawn numerous comments from passersby: “Love others, and appreciate what you have.”

That’s what my dad always said

“That’s what my dad always said. I learned that from him,” said Horowitz, a year-round resident and avid runner now in his mid-50s. One of the founders of Cellular One, he formerly co-owned the Miami Fusion franchise of Major League Soccer.

Ken Horowitz also used to own The Vicarage on North Lake Way, the island’s first historic home to be landmarked.  In addition to his wife and children, he has an 8-year-old 18-pound amaretto poodle, born on Halloween, named Boo.

One bottle’s not enough

“We live here year round, and I’m a runner. When you run in the summer, one bottle of water isn’t sufficient to keep you hydrated. There was a water fountain at the inlet, but none at the park,” and nothing in the budget, he said.

About three years ago, he asked the town to accept a donation for a fountain to be built. It required a resolution, because the installation called for a power hook-up so the water would be refrigerated, Horowitz said.

“I also run with my dog, Boo. So once again, the town agreed for me to donate additional money. The doggie bar was installed last week with tile around it,” said Horowitz, estimating the cost for both watering facilities was about $22,000, including upkeep. “The town wanted additional funds for perpetual maintenance on it. So there is money in a fund to pay for future repairs.” 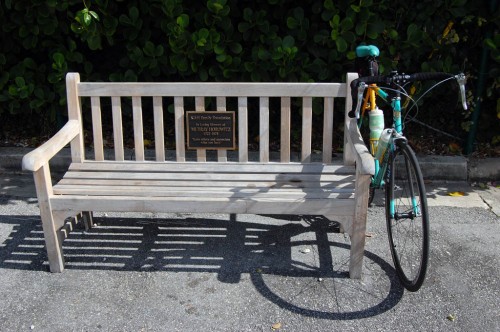 Funny you should mention the fountain

When I run into new folks at the inlet, I usually strike up a conversation and casually say, “You can tell you’re in Palm Beach when even the outdoor water fountains are refrigerated.”

If that seems to elicit a response, I step closer and whisper in a confidential tone, “But if you have a Palm Beach resident ID card and wave it in just the right spot, the fountain dispenses Evian water.”

You’d be amazed at how many people say, “REALLY?”

I like think Murray Horowitz is smiling when that happens.

7 Replies to “Who is the Murray Horowitz whose Plaque is on a Bench at the Palm Beach Inlet?”