I consider any ride where you end up with the same number of riders you started out with to be a good ride. We met that minimum standard.

Sunday night’s ride, though, was an illustration of why Palm Beach Bike Tours doesn’t pretend to actually lead bike tours.

As soon as you start adding riders, the job gets tougher.

Typically, I say, “I’m riding the Lake Okeechobee Scenic Trail Sunday night. I want to show a newbie some gators, so we’re going out in the afternoon and we’re going to stick around to see the full moon. If you are interested, call me and I’ll tell you about where I am on the trail and we can hook up.”

THIS weekend when I tried that, I got several maybes and then my phone started waking up around 11 AM with folks who said that they might make it from times ranging from 2:30 to 4:30.

A person I’ve never ridden with sent me an email saying that my number wasn’t in service when he called it, but I didn’t get his email until I had gotten back from the ride at about 11 P.M. My phone didn’t show any missed calls, so I don’t know what happened there. My apologies to Rich.

So, how was the ride?

Well, after telling you how hard it is to herd cats and how everyone was projecting different starting times, Matt, Jan, Jimmy, Chuck and Mathilde (who rode with me) all showed up at the starting point within 30 minutes of each other. That’s got to be some kind of record. 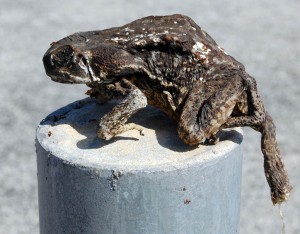 While we were waiting for the last couple to show up, we wandered up on the Port Mayaca locks where you can usually spot some good-sized gators. Indeed, we saw several, including one who might have gone 8 feet.

The most curious thing was a dried frog or toad someone had put on a post. (We tried to tell Mathilde that that particular species always climbs up on poles when they sense it it time to die, but she didn’t believe it. We also tried to talk her into taking it home – “Wouldn’t your roommate be surprised to see it perched on the cookie jar? – but she wasn’t buying that, either.) 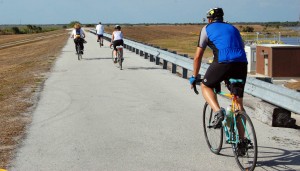 Who were the players?

He promised us a 7 MPH tailwind to start out. It was a headwind.

The group quickly fragmented. Matt and MP were way in the lead. Chuck, Jan and Jimmy were way at the back. I was too slow to catch the leaders and too fast to ride at the tail, so I learned how the poor guy feels who is caught between the breakaway and the peleton. Lonely. 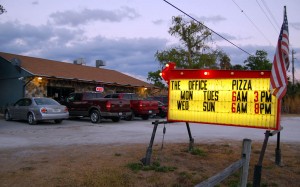 We stopped at the Chancey Lock, where we saw more gators, and at Henry Creek, where some fishermen were being busily chased to another location by a large water moccasin.

We got off the dike at Nubbin’s Slough and rode 100 yards or so north on 441 to The Office, a bar on the east side of the road. Most of us ordered the Slightly Naughty Roast Beef sandwich (because the Obscene RB sandwich is too much for anybody, including bikers). Chuck had a super good pizza he was nice enough to share.

The beer was cheap, the food was tasty and reasonably priced. The staff and other diners were friendly and concerned about us riding in the dark.

The sun was just about to set when Jan and Jimmy decided they’d had all the fun they could stand (or they liked the prospect of cheap beer, I’m not sure which). Matt volunteered to sprint back to the cars and come back to pick them up. Chuck, MP and I decided to soldier on.

Chuck would have been smart to have bailed with the other two. He started off slow and got slower. I told MP to ride on ahead at her own pace and I’d keep Chuck company. By now, the sun had gone all the way down and we were riding in moonlight strong enough to cast strong shadows. Nature sounds were all around us. 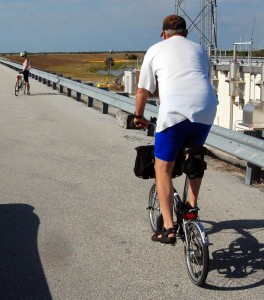 I thought I’d have to perform a buttectomy

Chuck kept griping that his hindquarters weren’t suited for riding an upright bike after being massaged on his bents for so long.

He was in so much difficulty, that I pulled off the trail and started setting up my emergency operating theater to perform a buttectomy, but he refused treatment at the last second. He said he was OK with the idea until he saw me honing my scalpel with a huge grin on my face. OK, scalpel, machete, what’s the difference? They’re both blades for cutting. Besides, big jobs require big tools.

I’ve been on the dike when the mosquitoes were so bad that you had to ride at least 12 MPH to keep from being eaten alive. Even then, the blood suckers are better than a wind tunnel at finding all the dead air parts on your body. You can count on them landing on any sheltered body part and refueling until they’re so heavy they drop off.

Fortunately, Sunday night was the exception. Except for a few minutes right at dusk, the air was almost bug-free. That’s a good thing, because Chuck would have been a couple of quarts low at his speed.

I’m not as steady as I once was 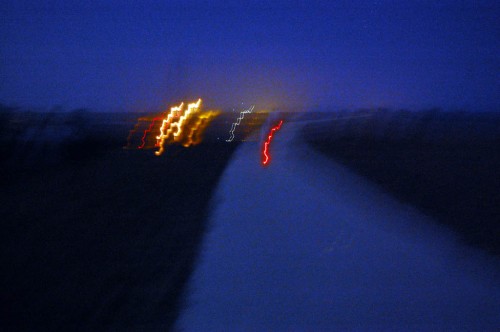 I tried to take a quick shot while Chuck was chugging down the trail in the moonlight, but I guess I can’t handhold a camera at 2 or 3 seconds like in the old days.

All in all, it was a pefect night: temps were on the cool side of comfortable; bugs were minimal; the sky was clear and the moon was bright; we were well-fed and surrounded by good friends (even if some of my descriptions didn’t sound like it).

3 Replies to “Lake O Full Moon Ride: a LOST opportunity to do a buttectomy”