Wife Lila decided to go with me when I spoke at a telecom conference in Las Vegas at the end of October. 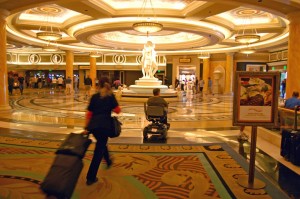 We learned how much walking there is to do even inside one casino when Kid Adam got married there in 2005. Lila did battle with a weed root in yard several months ago and the weed won. (I believe in letting foliage take its natural course, so that would never happen to me.) Since then, she’s had difficulties walking long distances on hard surfaces.

As soon as we checked into Caesars Palace, we headed for the bell captain to see if motorized scooters were available for rent.

The bell captain gave her a two-minute driving course: “Pull on the right lever to go forward; pull on the left to back up. Start out in Turtle until you get comfortable, then graduate to Jackrabbit.”

Except for that elevator incident….

She adapted quite quickly. The scooter had a tight turning radius and would move at faster than a walking pace. She did great until she encountered her first elevator. Somehow or another, she managed to turn too sharp getting out and got stuck in the door, which kept saying in an increasingly annoying female voice, “Door is Closing!!” 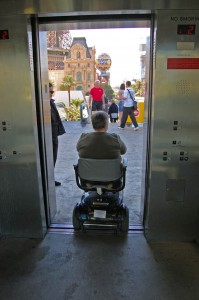 Trust me it WASN’T closing. At least not until Lila got off the scooter, and I lifted the rear end so it would clear. Somewhere in Security Land, that video must be on the Greatest Hits List.

Most folks (at least the smart ones) gave her plenty of clearance. She did learn that most tourists are busy looking at the distance from standing eyelevel and aren’t aware of someone much lower at seated height.

I told her it was a shame that I didn’t have my bike with me so she could borrow my Delta Airzound Bike Horn and flashing strobe light.

ADA is a Good Thing

Folks on two good legs wonder what’s the big deal with the Americans with Disabilities Act (ADA). When you have to figure out how to find ramps, elevators, automatic doors (or nice folks who will open them for you), then you gain a new appreciation for the challenges faced by wheelchair users. 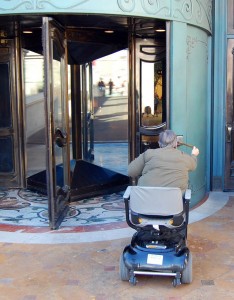 Even when you can find an automatic door opener, the button’s not always in a convenient place.

When you go through an automatic revolving door, the rotation slows down, at least until some impatient person gets on behind you and starts pushing it manually.

Overall, most people were helpful.

The first evening at Caesar’s Palace, we took off trying to find a reasonable place to eat. We had a map of the joint, but I do a lot better when I can see the sun or use my GPS. 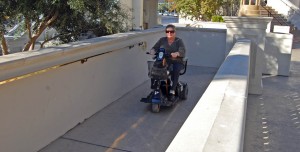 After a while, though, we got better at breaking the code.

She had it figured out by Day 2

By the second day, when I was stuck at the seminar, she gathered up enough courage to head out on the strip to explore on her own and stayed out until the battery was getting low. 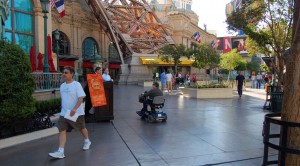 Overall the $105 was a good investment. She got to see a lot more than she would have hobbling along with a cane. It was a good exposure to the options that are available if you are temporarily or permanently disabled. It sure opened my eyes to the barriers to mobility that I had never considered before.

Lesson put to good use

We had to make a trip to Lowes this weekend to pick up some things that had us running all over the store. She jumped on a scooter at the front door and turned an ordeal into a pleasant experience. (BTW, the scooter won’t work if it’s still plugged into the wall. Just thought I’d pass that tip on so you don’t look as foolish as we did when we called for help.)

2 Replies to “Las Vegas by Scooter”