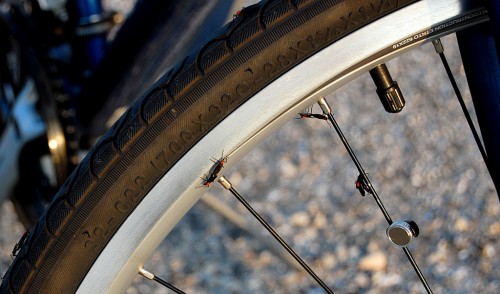 I need to tell you a little bit about one of my riding partners, Anne Rodgers. She’s got a quarter-century or so of newspapering in her past, so she has, to use the old Civil War expression, “been to town and seen the elephant.”

She and Dr. Maureen Whelihan are working on a book tentatively titled Kiss and Tell, based on 1,300 surveys asking women ages 15 to 97 six questions about their sexual desires. Based on some of the interviews she’s shared, it’s pretty obvious that she’s learned a lot about things involving the juxtaposition of Slot A and Tab B and it takes quite a bit to shock her.

Look what they’re doing on my seat! 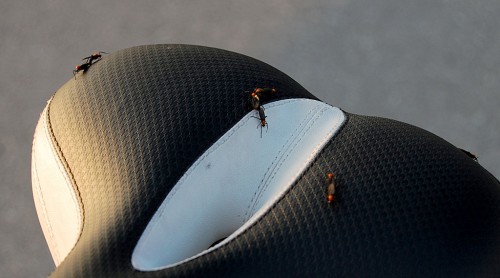 All of that didn’t prepare her for what she saw when we unloaded our bikes for a night ride on the Lake Okeechobee Scenic Trail (LOST) Saturday evening.

In the 60s, a popular wall poster showed a pair of ducks flying in a very friendly position, with the headline, “Fly United” printed over them. This is the time of year when the aptly-named lovebugs fly united doing their mating dance.

While we were getting our bikes to meet up with Adel and Everett, lovebugs by the hundreds swarmed around her bike, demonstrating a friendliness that disconcerted Anne. She was particularly offended by a Ménage à six or seven taking place on her bike saddle.

Lovebugs coming to a highway near you 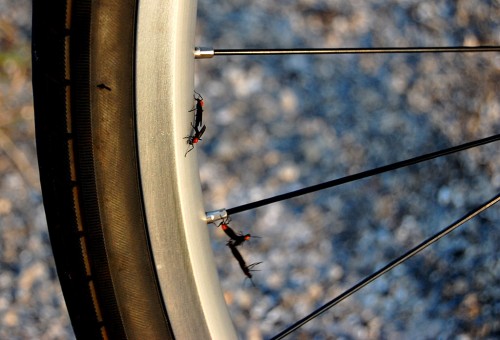 Lovebugs, also known as also known as the honeymoon fly, kissingbug or double-headedbug were first spotted in Texas in 1940. They look sort of like a firefly, but without the flash, and with significantly lower moral standards.

They don’t bite nor sting, but their huge swarms – resembling, in a lot of ways, a black snowstorm – can clog car radiators, cover windshields and eat the paint off cars. They have very soft bodies which splatter on contact.

Because they’re so thick, they can fly down your shirt, under your helmet or stick to the sweat on your body, where they splash around like college kids in a hot tub on spring break. If you try to brush them off, they are so soft you’re more likely to smear them than remove them.

Fortunately for us, the bugs didn’t bother us much once we got rolling. The drought conditions that have Lake Okeechobee at a near all-time low have cut down on the mosquito population and may have dropped lovebug numbers slightly.

4 Replies to “Lovebugs on the Lake Okeechobee Scenic Trail”