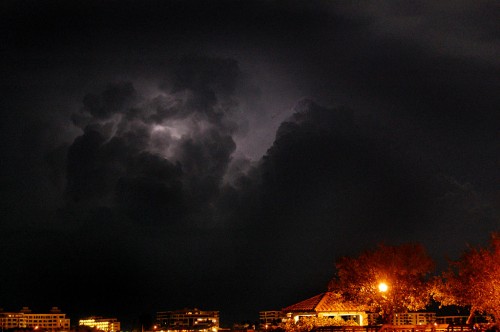 Anne and Osa and I were all set to do a short ride Sunday afternoon around 5:30. The temps were great, but the winds were in the teens out of the west, gusting to 32 mph. We were planning a north-sound ride to avoid the worst of it.

Bike riders can be SO smug

An hour or so later, Anne sends a smug email saying that she took advantage of a break in the weather to get in a 30-minute neighborhood spin. “Got misted just as I hit the elevator,” she bragged. “Now the sun’s out again!” To top it off, she followed it with a post, “Just stepped outside. There’s a rainbow over the Intracoastal, the sun is shining on my west side and it’s still raining a little bit. A trifecta!”

Just about the time Osa and I were exchanging emails lamenting our missed opportunity, the sky opened up again, the wind gauge looked like it was going to spin off the post and lightning flashed all around. We felt vindicated.

Half an hour later, Wife Lila looked out the window and said the light show over the ocean was spectacular. Foodie Friend Jan Norris posted something similar on Facebook, so we took a quick jaunt down to Bryant Park in Lake Worth where we could get a good view.

It took about 30 minutes to get our act together and get to the park, so we missed the peak lightning action, but what we DID see was awesome. It was far enough out to sea that we couldn’t hear the thunder, so I used Beethoven’s 5th for a soundtrack. It’s a cliche, but it seemed to fit the visuals.

2 Replies to “Lightning Over the Ocean”