I mentioned last week that I normally ride the road as a matter of principle. Then I discovered  that cyclists who ride like motorized vehicles sometimes miss things and I decided to change my focus.

I headed over to Flagler Drive 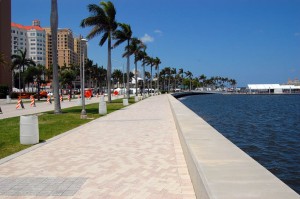 I’m not fond of riding Flagler, even though it has wide lanes. It feels like traffic is always in a hurry or the drivers are distracted by all of the pretty views.

On the other hand, Flagler drive has a wide sidewalk running right next to the Intracoastal Waterway for most of its length.

I decided I’d skip the road and document the trail.

I ran into a rolling Ft. Lauderdale Birthday Party 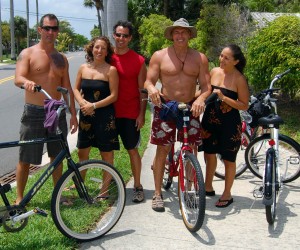 The first folks I stumbled across were Mike, Andrea, Jeff, Jerry and LeighAnn, Ft. Lauderdale friends who had come up to West Palm Beach to celebrate a triple 40th birthday. They had made a loop of West Palm Beach and the Palm Beach Lake Trail and were heading back to the Grandview Gardens Bed and Breakfast at 1608 Lake Ave.

They were a little confused about the best way to get there and I was curious to see the place, so I offered to be their guide. The B&B turned out to be an attractive 1923 home that had been restored to reflect its original Spanish Mediterranean architecture.

The best part is that they had bikes available for their guests.

After dropping the birthday celebrants off, I headed back to Flagler.

I forgot about SunFest

West Palm Beach has a music / crafts / arts festival that blocks off Flagler Drive for about a week. I hate crowds, so I haven’t been to SunFest in 20 or 25 years, and even then it was because I was assigned to shoot it.

Workers were setting up for the big event and the sidewalk  / trail was closed in the downtown area, so I decided to bail on the project until we get our downtown back.

Ashley was celebrating her confirmation

At the turnaround point, I met Ashley (with the red balloon) and her friends. They were celebrating Ashley’s confirmation. The balloon figured into a making a wish, but she wouldn’t tell me what the wish was.

I bopped over to the Palm Beach Lake Trail 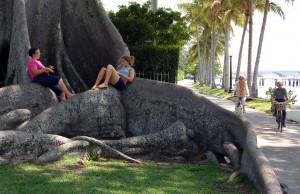 Since I couldn’t ride Flagler, I decided to cross the Middle Bridge and head over to the Palm Beach Lake Trail.

The big tree near the Flagler Museum is always a good place to meet folks. Melody (appropriate name) and Siena from Lake Worth were taking advantage of the shade to do some pickin’ and singin’. 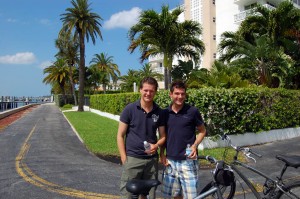 On the way home, I stopped to make a minor adjustment on my bike and struck up a conversation with Martin and Julian, a couple of Germans who are doing a four-month internship with Siemens in Boca Raton.

Siemens is a telecomunications company, among other things. Since I’m a former telecom manger, it was fun to get their perspective on what they see happening in the industry.

It was a perfect April day

I have to admit that I was a little worried when I started out because the winds were blowing out of the east at a steady 21 mph, gusting to 26. Winds are to Florida what mountains are to Colorado. Fortunately, I was riding slowly and the Lake Trail was pretty much protected from the winds, so it turned out to be a super day for a ride.

I didn’t accomplish what I had planned, but I met some nice people. You can’t beat that.

4 Replies to “Meeting Folks Along the Trail”