I mentioned that we started up to see the Space Shuttle launch last week, but it was scrubbed because of a hydrogen leak. We decided to give NASA a second chance. The only big change we made was to cancel our old room reservations and book a new room in Clermont so we’d be closer to where I was planning to ride the next morning.

I called the old place and said, “I just read a bunch of reviews about your establishment. Any time there are headlines like ‘frightening’, ‘filthy’ and ‘should  be condemned,’ I get nervous.”

Instead of an argument or explanation, the guy at the other end just said, “Your cancellation number is…..”

We ended up at Robert Nicol Park

We decided to give Robert Nicol Park due west of the launch site another chance.

Let me go on record that Robert Nicol Park must have the cleanest restrooms on the Space Coast. They have to be clean because they were locked. On a Sunday afternoon when hundreds of people were going to show up.

We scored a nice spot 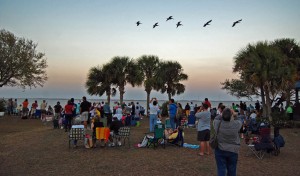 The park has limited parking, but plenty of room for people to spread out. We picked a shady spot on a slight rise away from the water’s edge. I figured a couple of trees would look good silhouetted in the launch gl0w. Besides, I didn’t know exactly where the Shuttle pad was, I didn’t HAVE to produce any art and I’d rather be cool than sunburned.

I had lots of toys along

In addition to stuff to drink and some folding chairs, I brought along a tripod for the video camera, my Nikon D40 and two portable scanners. I used one scanner to monitor a ham radio rebroadcast of NASA updates and another than scanned a number of freqs used by the Kennedy Space Center.

That proved really useful a few years back when I heard NASA talking about a problem that could cause the launch to scrub. As soon as I saw that a postponement was likely, we started packing up to boogie down the road before the official announcement was made. 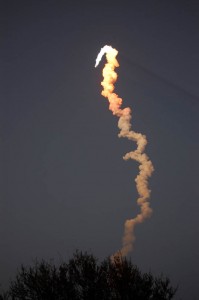 Only a couple of hiccups

Radio traffic was very routine. There was some concern about a large freighter that was on a heading that would take him close to where the expended fuel tanks would drop, but the captain was contacted and he slowed his speed to be out of the zone at launch.

The Shuttle also picked up an extra passenger: a fruit bat that attached him(her)self to a fuel tank. His prognosis was not good. The launch director Mike Leinbach told a a post-launch news conference: “We’re characterizing him as unexpected debris, and he’s probably still unexpected debris somewhere.”

Here is video from launch through fuel tank drop

People started heading for their cars

The shuttle launched at 7:43 PM, and almost as soon as the shuttle cleared the treeline, we saw our neighbors heading to their cars. We couldn’t figure out why, but we’d soon learn. In the meantime, though, the show continued. 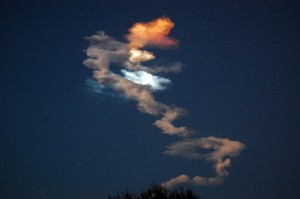 We watched the external fuel tanks drop (hope that freighter WAS out of the way) and couldn’t believe the beautiful colors the setting sun was painting on the spreading contrail.

We started packing up and dragging our stuff back to the car. The parking lot was about half empty. Traffic was heavy on the main road, so I decided NOT to go south to pick up the 528 like we had planned to go west to Clermont.

I figured we’d go north and let my GPS calculate a new route. 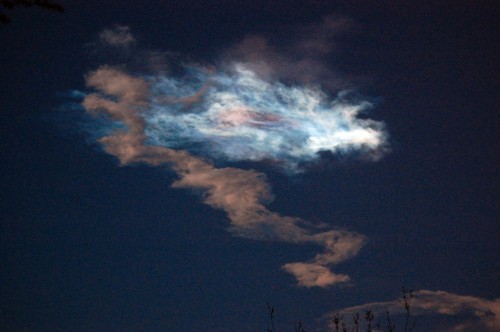 That was the last good thing of the day

We hooked up with Jan on the FRS radio and told her about our route change. We did great for a couple of miles then we hit a parking lot. After about 30 minutes, we came to a cross road where a jillion cars wanted to go home just like we did. They were taking advantage of any break to jump out. We couldn’t figure out why nobody was directing traffic.

Then we figured it out: there was no place to direct the traffic to go. It was solid gridlock.

NASA radio broadcast a bulletin prior to launch telling everyone what to do if the Shuttle exploded close to the ground, and you saw a cloud of toxic fumes coming toward you. Based on what I saw, the answer is, “Hold your hand up in the air and say, ‘I’m coming, Lord’,” because you have about as much chance of escaping as that bat clinging to the fuel tank.

Jan bailed on us

Jan said it was time for a bathroom break and opted to go a different route that she swore was faster. We soldiered on. At one point, we disregarded the GPS and gambled on an alternate track. That just put us on a road with a net loss of about 12 miles.

Jan wasn’t doing well, either. She was caught in another traffic jam. When she finally made it to a gas station, she encountered another form of gridlock: long lines at the restrooms. Women commandeered the mens’ room.

“Natural breaks” along the road

If you’ve every watched the Tour de France on TV, you’ve probably wondered where do the riders go to take care of business while they’re racing. There’s an unwritten rule that riders who are taking a “natural break” aren’t photographed. (There are exceptions to that rule.)

When the tieups hit about the two-hour mark, we passed a score of cars where the passengers – men and women – had stopped on the side of the road to take “natural breaks.” The longer the tieup, the less modest the breaks became. I didn’t actually SEE anyone hanging out a car window, but I DID have to turn on my windshield wipers at one point.

What’s the parallel to Disney World?

When the kids were little, I remember standing in line two hours for a 45-second ride. NASA has the whole process reversed: you get the 45-second ride at the front end and THEN you have a four-hour wait in line. It was after midnight when we finally got the 60 miles to our room.

I stuck my Surly Long Haul Trucker inside the van while we were watching the launch. I didn’t want to tempt anyone. If I had known about the traffic jams, I probably could have gotten to the motel faster on a bike. I surely would have enjoyed the trip a lot more.

8 Replies to “Shuttle Launch Reminds Me of Disney World”