Before retirement, I used to be active on a telecom manager listserve. Telecom, as you might suspect is mostly Old Technology, inhabited by old farts. There are exceptions, like Jess G, the 20-something editor of Voice Report, who thinks I should be Twittering, but she doesn’t count. I have Power Bars in my bike bag older than she is.

The Sears Spyder was perfect for that demographic 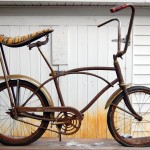 At the risk of going seriously off-topic, which I’m known to do, I posted a link to the story about Bro Mark’s Sears Spyder to the group. (I slipped back on topic by pointing out that my mother still has the rotary dial telephone that we used to talk on when Mark was riding his bicycle. She had been paying a monthly charge on that phone from the late 50s until the 80s when I happened to look at her bill.)

A Schwinn Stingray, not a Sears Spyder

This is almost a newspaper story….

In 1963 I got my first paper route at the age of ten. 86 papers, twice a week, 1.5 cents per paper, wore the over-the-shoulder double bag (pull from front till empty, spin it around). I was gettin’ rich and used the money to buy a new bike.

Thanks for drawing a memory from deep in the banks. Oh, and we’ve talked cycling before, thought you might like to see what my latest crazy passion is.

I currently hold the 55-59 age record for fastest lap at 9.636 seconds (once the good guys get to the track it will be shredded I’m sure). I’m also sporting some scrapes from a couple of spills so wondering just how foolish this is for an old man…

Hope retirement is serving you well, and glad to see you still posting. Ride on!

I had seen some of the Tour de France stages end in a track finish, but I never had any idea about how steep the banks are.

There is just something wrong about wanting to ride your bicycle on a slant a mountain goat couldn’t negotiate.

Don’s a better man than me.

The Aussies weigh in

Two members of an Australian biking forum came up with suggestions.

hey Ken
I’m with you there, my brother tore up my Felix the Cat comic back in about 1958, still can’t let him off for that. At least the bike looks complete, which is always a good start, maybe you’ll have a change of heart after thinking about it for a while. 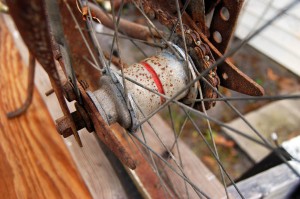 Another Aussie had a better idea:

… bugger him, restore it for yourself or your kids. Collect more for parts, then restore them after finding more for parts, spend up big geting a stupidly rare one for your “partner”, dont worry if they protest they dont like riding it, it will look great in the shed under a white sheet next to the others, start buying some NOS stuff , start hording it just in case, spend hours on ebay searching for that special mild steel bolt you need to finish the complete NOS frame you found on craigs list (you know the bolt I mean, the one that has a squiggly line on it, not like the one at the local bolt shop for 10c without the squiggly line)…… etc etc etc………………. 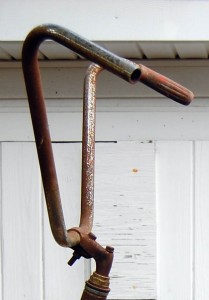 Bwana, a poster in another group didn’t have happy memories about his Spyder:

I lost a tooth riding a Sears Spyder in the mid-60s. The handlebar hadn’t been properly tightened in the stem, and I was pedaling out of the seat. Next thing I knew, I was doing a faceplant. After that I didn’t much care for the Spyder/Stingray look.

When I suggested that he at least learned a valuble lesson: make sure your bolts are tight, he replied:

Well, I was like 8 or 9 at the time, and I’m fairly sure my father didn’t have any tools other than a hammer and a screwdriver. But a few years later, with what I’d learned from my maternal grandfather and some tools he gave me, I did start doing my own wrenching. Still, tall handlebars like on the Spyder seem inherently unsafe, lots of leverage there to rotate them in the stem.