I have a bad feeling about Ike.

Like my kid, Matt, said. “The projected track is right down my driveway.”

There’s still time for it to turn, but we’re right in the center of the cone when it’s in the Bahamas on Tuesday. To make things worse, we were planning on heading to Memphis on Wednesday to ride in the MS-150 there. We might still make it, but my focus is on Ike right now.

This will be the first hurricane in recent history that we haven’t ridden out on The Palm Beach Post’s 4th floor, where I was telecommunications manager. I retired a week too early. The Post was a great place to watch the storms. We had a huge generator capable of powering the whole facility and banks of 120-mph-rated windows overlooking the whole city.

Watching the transformers blowing up with a bright green flash and a shower of sparks must be like overlooking downtown Bagdad during a bombing run.

Before I got into telecom, I was a photographer who chased 13 hurricanes ranging the whole coast from Mexico through all the Gulf states and as far north as Atlantic City, N.J.. Unfortunately, in those pre-Weather Channel days, I had a reputation for never guessing the right place to go for landfall. I chased Hurricane Elena 2,500 miles from Mobile to Tampa and then back to Mississippi while it tried to make up its mind.

The pictures I shot during the storms were on film in pre-digital days and I haven’t had time to convert them, so here are some less dramatic pictures taken during the 2004-05 season, along with some things to think about.

The southeast coast of Florida where we are is blessed with deep water offshore that don’t result in the huge storm surges that happen in the shallower Gulf waters. Except for residents right on the ocean, we don’t have to worry so much about running from the water as much as hiding from the wind.

Key to survival: keep the wind out 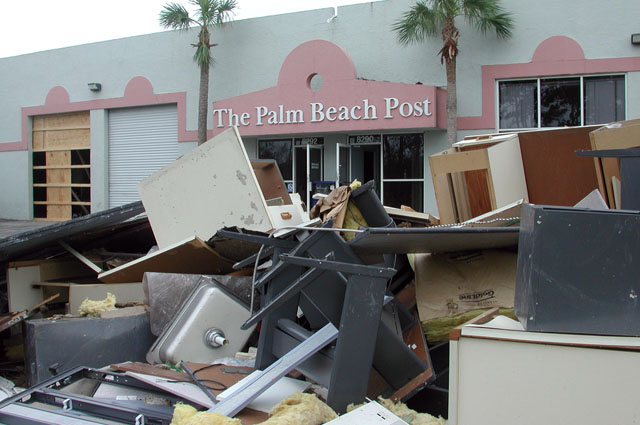 Our office in Port St. Lucie had big bay doors that failed in Frances. Once the wind got inside the building, the roof peeled off and the water came in. The key to survival is to make sure the wind never gets inside.

One of the most effective demos of that I ever saw was a video where a TV station put a camera inside a house with normal furnishings and a couple of dummies. They backed an airboat into the yard and revved up the prop to simulate 100 mph winds. The wind picked up a clay pot in the yard, hurled it through the window, and the resulting glass shards sliced up everything in the room.

If we elect not to ride out the storm at home, we may go to an office building where my sons work. Since I haven’t spent much time there, I raised the following questions that might give you some food for thought while you’re making your storm preps:

1. ARE there interior spaces to go to? Even hurricane-rated windows can fail. If the windows blow out, then count on the whole floor becoming a wind tunnel because the corresponding windows on the far end are going to pop out.

2. Are there any places to go in the core of the building that aren’t made of dry wall, which will come apart if it gets wet from Item #1? At The Post, I knew all the fallback positions like system rooms and places like The Pennysaver conference room with old exterior walls on three sides and a concrete floor above it.

If we had to shelter large numbers of employees and their families, the plan was to huddle in the stair towers, which had been designed for fire safety and had concrete block walls. I warned people that it would be like sitting for eight hours under Niagara Falls, with water streaming in from the smoke vents on the roof, and the most ungodly sounds you’ve ever heard. Oh, and did I mention that you’d be in total darkness in 100% humidty with X number of your closest friends and no restroom facilities?

3. Who volunteers to carry your mother up and down the stairs when the power to the elevator is out? (She messed up her back this pulling up some roots against her family’s advice.)

Will the plumbing work without power?

4. What’s the plumbing situation? Does the water supply depend on AC power?

5. Will you have the ability to move from floor to floor if you had to evacuate the one you’re on?

6. If you park your car in the underground garage, can you get out if there is no power to open the secuity gates?

7. Is the parking garage dry or does it depend on sump pumps to handle water?

8. Try to find a sheltered space to park your car. Point the front windshield toward the wind. It’s less likely than the other windows to shatter if wind-blown debris hits it. Our office roof was covered with a fine gravel that became airborne and popped car windows all over the lot.

It’s what’s IN the wind that hurts 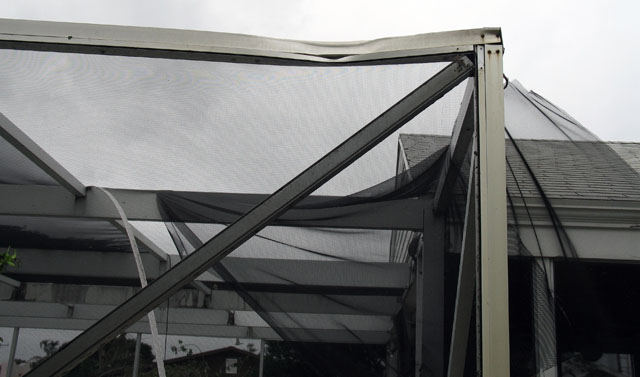 9. Stay out of the wind. It ain’t the wind that hurts you. It’s the stuff that the wind blows that will get you. A tarp nailed down to a neighbor’s roof from an earlier storm became airborne and took out part of our pool screen framing, gouged holes in our shingles and kept on flying. The funny thing was that the tarp, with the 1x4s still attached to it was wrapped around a tree in our front yard, but by the time I had walked around the house assessing damage, someone had already made off with it. I hope he nailed it down better than the last guy.

9. Cordless phones won’t work if the power is out. Make sure you have at least one POTS (Plain Old Telephone Service) phone for emergency use.

10. Chemical light sticks are great to have on hand. They put out light for up to 12 hours, don’t produce heat and won’t set your house on fire like candles. Even when they’re dim, they’ll light your way to the bathroom. Check out party stores for them if your big box hardware store is out.

11. Be careful when it’s time to clean up the mess. More folks are hurt after the storm than during the storm. Stay hydrated, wear gloves, safety glasses, good shoes and appropriate clothes to protect yourself against scratches. Quit when you’re tired. 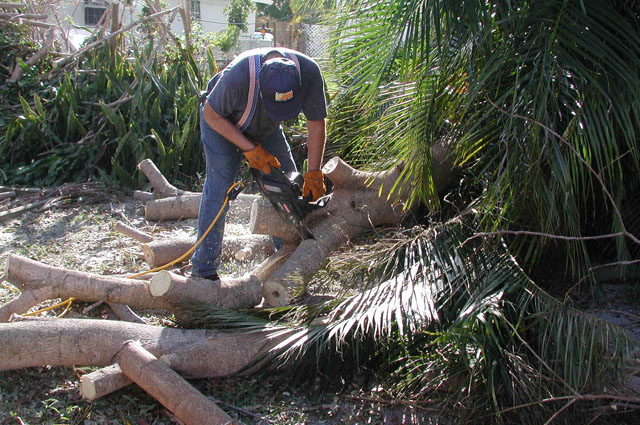 12. Generators are great, but don’t hook them up to your house unless you know what you’re doing and don’t run them inside. Don’t run your extension cords through puddles.

13. Fix-A-Flat, an aerosol can that will inflate your tires and seal small punctures is a lifesaver when you’re driving on streets that are littered with glass and nails.

Take these precautions and you might get battered, but you’ll improve your odds to survive to ride another day. 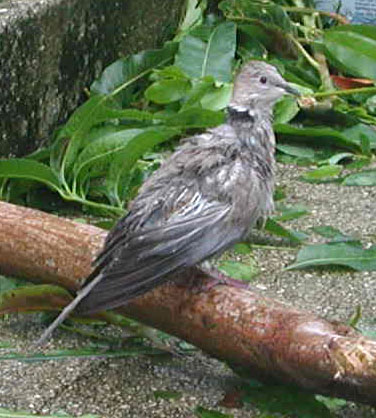 Hey, at least we don’t have to worry about blizzards and earthquakes down here.

I hope my next posting will be purely bike-related.

2 Replies to “Storm Advice: Hide From Wind, Run From Water”