The Bianchi Talladega was the coolest bike I had ever owned, well with the exception of the Sears Spyder that I had early on. That bike ruled the neighborhood when I was on it.

I had the bike for less than a month and tore it down and packed it up to be shipped to West Palm Beach, FL on the same flight that I was on to do a ride with Ken and Wally and Jan Norris. The ride was from someplace (I’ve forgotten because of a head injury on the same bike, but that comes later on…) to Key West, FL. 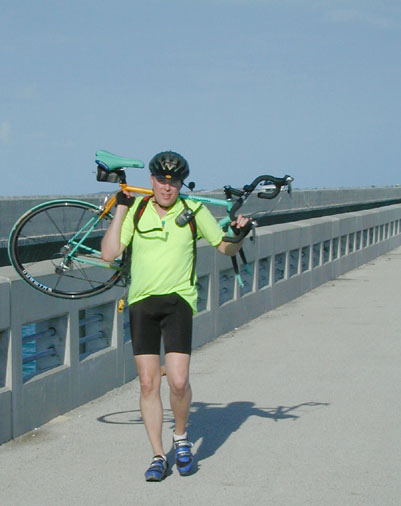 I unpacked the bike from the Thule Round Trip Bike Travel Case (that a certain someone from the bike store had loaned someone I knew so that I could ship my new bike safely) and low and behold something as heavy as an anvil had been sitting on the case all the way from St. Louis, MO to West Palm Beach, Fl because there was a noticeable dent in the bike frame. Grrrrrr.

The ride to Key West, Fl was wonderful. Except for the ride across the 7-mile bridge where I picked up some broken glass and got a flat. The tire was ruined, not just the tube. Fortunately, we had our very own SAG. Unfortunately, the SAG was not on the same bridge as I was. So we took the front tire off and someone else (neither of the before mentioned) rode ahead with my tire to meet the SAG in order to get to a bike shop before it closed to purchase a new tire and tube. That left me with having to hoof my new bike across the bridge, a long way across the bridge. Did I mention it was a 7-mile bridge? 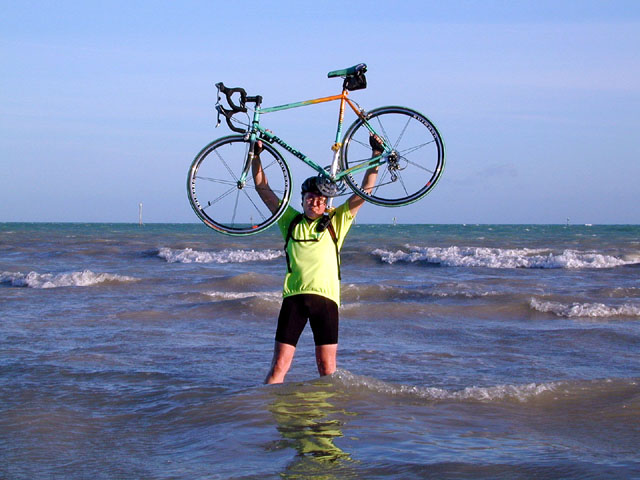 The rest of the ride was perfect once the bike was back together. It was on that ride that I started hoisting the Bianchi over my head to document each ride.

Here is the first time that the Bianchi was “celebrated” after a ride. It is always good when there is water on a ride and I can ride down to the water’s edge, get off and wade into the water and hold the bike up in the air. People look at me like I am a lemming heading out to my own demise when I do it. Silly people, I suspect they don’t ride a bike.

The Bianchi with it’s strong yet light frame endured a lot in the years that I owned it (with the exception of the dent from the airline). In fact it proved itself to be quite the iron horse on one occasion. Technically it is a stainless steel horse with a mixture of Reynolds 631/525 aluminum and carbon fiber materials. Nonetheless it proved itself to be a formidable opponent when pressed into service.

I Had This Accident… 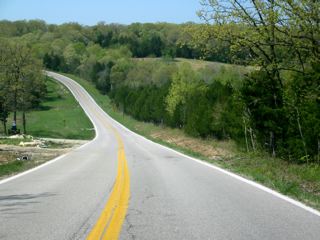 I was riding on some of the Ozark Mountain hills in Jefferson, MO on the Bianchi years ago while training for a ride that I was going to do in Mountains of Tennessee later on. I was riding alone out on some obscure hills when I had my first accident on the bike.

Two dogs came out of a country lane and while I was used to dogs nipping at the pedals of my bike, I was not prepared for what they did.

They ran right in front of my bike.

We, of course, collided and I was thrown over the handlebars. I suffered a concussion (yes, I was wearing a helmet) and that has left me with some precise short-term memory loss that continues today. The Bianchi on the other hand came through like a champ. A few scratches on the brake hoods was all that it suffered, amazingly because I was flying down a hill when I hit the two dogs. Here is a photo of the road I was going down. 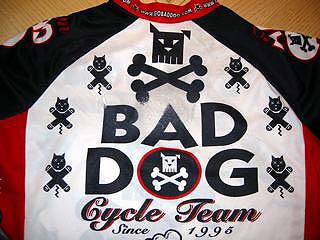 And here is what the back of my Bad Dog jersey looked like after hitting the road. Note the abrasion above the “A”.

The bruises I suffered are not suitable for posting here.

So passing the Bianchi torch to Matt also means passing on the “Hoisting of the Bianchi” as well. I guess I should have gotten that in writing when we were negotiating the price…

Got a Flat, Walking Across the Seven Mile Bridge

Where I Had The Accident

Some of the best miles I have ridden were on this Bianchi Talladega.

Detailed view of the TurboSpoke mounted on the Bianchi.

Day Two: TurboSpoke Still on the Bike but Disabled

Lookout Mountain in Chattanooga, TN – My First Year on the Ride

Mile 90 in a cotton field in Tunica, Mississippi

The paint job really stands out in a crowd of bicycles.

Riding with Lance Armstrong in Texas in 2005

Here I am explaining to Lance Armstrong about my dog toubles.

climbing down the bank to the Mississippi River

walking across the river to get to Tower Rock

near vertical climb up Tower Rock

where the dents really came from

at the top of Tower Rock

3 Replies to “When the 2001 Bianchi Talladega was Brand New”