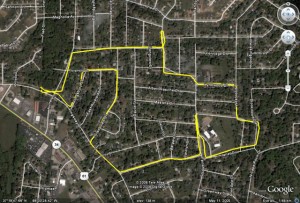 Nearly half a century ago, when I was 12 years old, I delivered The Southeast Missourian as a sub. I never knew whether that meant “substitute,” “subordinate” or what, but it paid $2.50 a week plus meager tips to throw papers six days a week in all kinds of weather and collect for them on Saturday mornings.

That came out to about 14 cents an hour.

After working for another kid, The Missourian offered me a route of my own. I started with 90 customers and built the route up to about 300 when I gave it up.

Yellow track is part of route

The yellow track shows the parameter of the route. In addition to those streets, I also had to ride about a mile to a filling station to pick up my papers and all of those cross streets in the middle.

This was NOT a flat route. Some of those grades hit 20% and a lot of them are greater than 10%.

Oh, yes, back in those days they were almost all gravel.

My kids have heard my stories about having to ride uphill both ways, in the snow, on a bike with no seat. Let me tell you, when you have a huge basket full of newspapers on the front of a  bike with no gears, it might as well be all of those things.

This was spooky when you were a kid 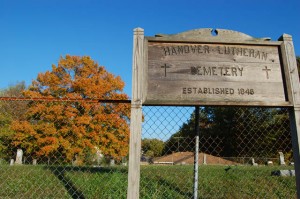 Right at the edge of my route was a pasture that had an overgrown cemetery in it. Even as a kid, I was fascinated by old things, so I got up enough nerve to brave the grass, brambles, chiggers and the snakes that I knew were there, to explore the old tombstones.

Today, the Hanover Lutheran Cemetery, also known as the Old Bertling Cemetery, is in the middle of a housing development and is very well kept.

It was a whole lot cooler when it was out in the middle of a cow pasture, though.

Lots of stones are broken

Based on the number of broken and missing tombstones, I get the feeling that not every kid exploring the graveyard was as respectful of the dead as I was.

Still, it’s great to know that someone’s taking care of the place today. When I walked the grounds today, I noticed that the area around the site had been sloped away at quite an angle.

I wondered if they had cut it a little close and hit any of the old graves when they were grading it.

Ran into a woman

At the crest of one of the hills, I saw an elderly woman walking a dog. I commented to her that the hills seemed to have gotten a little steeper over the last 50 years.

As I pulled away, I wondered if she might have been one of my former customers. Then I realized that she would have had to be about 130 years old for that to be true.

When I got my own route, I started making big bucks – about 25 bucks a week. That doesn’t sound like much until you consider that I only made twice that as a reporter for The Missourian.

Dad, who would occasionally grouse that I cost him more in cold medicine than I made delivering the papers, made me keep a full set of books on my route, something that paid off in later years. I still believe the three years I spent carrying papers was the best training I ever received.

Paperboy of the Year Twice

I won a $25 savings bond as Paperboy of the Year the two years I was eligible for it. The award was based on growing the size of your route, the number of complaints you received and how well you paid your bill. (We had to buy the papers, then we would collect for them. If a customer skipped town, it came out of our pocket.)

Paying my bill was no problem. Dad kept a close eye on my books to make sure I didn’t do anything foolish. In fact, almost all my personal expenses for my first year at Ohio University came out of paper route savings.

Getting customers was easy, too. I’d always order several more papers than I had customers so I could give prospective subscribers a week or two of free papers to get them hooked. I was a pretty persuasive – read obnoxious – salesman, too. Maybe that’s why I hate ’em today.

I had business cards printed up so that subscribers would call me at home if they missed their paper instead of calling The Missourian. As far as the paper knew, I NEVER had dissatisfied customers.

2 Replies to “50 Years and the Hills Have Gotten Steeper”