It was time for a quick ride to the Palm Beach Inlet Friday afternoon. The temps weren’t too high and the wind was only about 7 mph out of the east. It was a perfect day to poke along shooting pictures for a future piece on Palm Beach’s Lake Trail.

Earlier in the day, I saw a Coastal Flood Warning show up on Weatherbug. I figured it was due to Tropical Storm Kyle kicking up the waves along the East Coast.

Debris on the trail

On the northbound leg, I saw debris on the trail that indicated that the water must have been high at some point. The trail borders the Intracoastal Waterway.

When I got to the Lake Worth Inlet at the north end of Palm Beach, the tide was rising higher than usual. The water was almost touching the bottom of the dock.

Now there’s water in the way 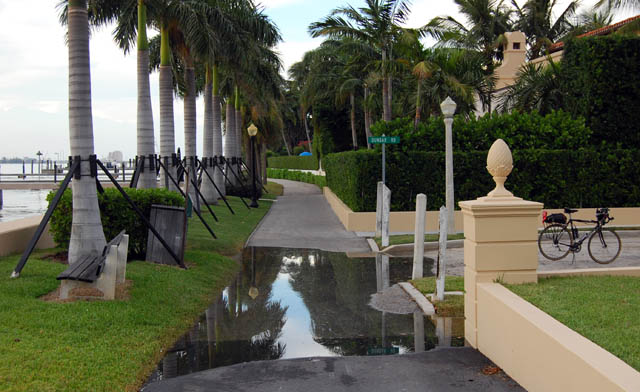 On the way back home, I came to a low spot and saw that there was about half an inch of water over the trail. Since the Intracoastal Waterway is brackish water, particularly when the tide is coming in, I slowed way down. Salt water is something you don’t want to have splashing all over your aluminum rims and frame.
LBS owner Wayne (remember Wayne?) took me to task one day for not carefully wiping my bike down after riding A1A along the ocean. He pointed out that my spokes and bars were rusting from the salt spray.

When we first moved down here from the Rust Belt, I told someone that my car would probably last forever since I wouldn’t be driving through salt put on the roads to melt ice and snow. That was before I learned that they may not salt the roads like up north, but that the whole atmosphere down here is full of salt.

A company car owned by one of our execs was due for replacement and it was put up for sale. I knew he didn’t drive much and that he was very conservative, so I asked him if it would be a good deal. “I live in an oceanfront condo,” he said. “You don’t want that car. It’s just eaten up with rust from the constant exposure to salt air.”

When we rode from Key Largo to Key West, we struck up a conversation with a waitress who said she used to ride “up north,” but that you “couldn’t keep a bike down here.”

“Why? Is it because they get stolen?”

“No, its because they rust away. EVERYTHING down here rusts: your refrigerator, all of your applicances. Anything that’s made of metal rusts.”

Water was deeper by Dunbar 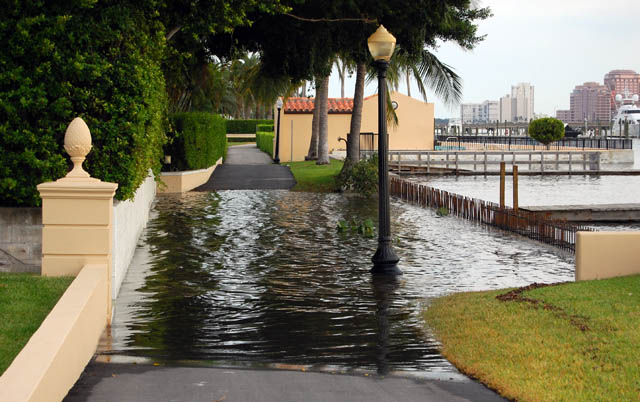 When I got to the intersection of Dunbar and Lake Trail, water was a couple of inches deep over the bike path. I got off and carried my bike over to dry pavement. That’s one of the advantages of biking in Shimano sandals. It doesn’t hurt if it rains or you have to wade water.

When I looked a hundred feet to the south, it was obvious that I was going to have to abandon the trail and take to the surface streets. The water ahead looked like it was a foot or two deep.

Shallow water is OK, but no telling what’s in deep water 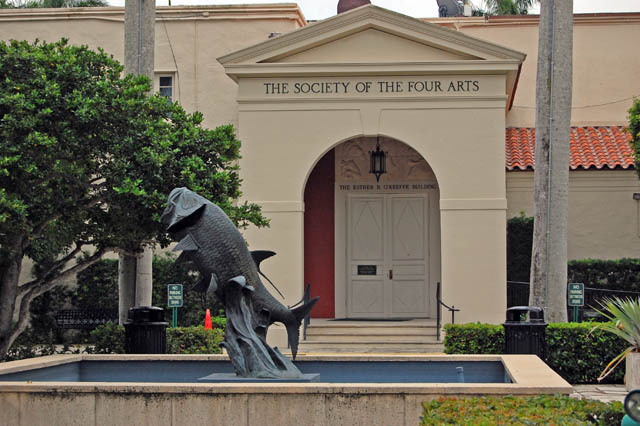 I got to thinking about the Silver King sculpture I had passed at the Four Arts Museum at the start of the ride.

This is Florida. No telling what might be lurking just under the surface of that water.