Scott took up biking in May. He’s a runner. He’s working toward the Miami half IronMan in November. After riding a solid but basic Specialized road bike for a few months, he was ready to upgrade. Below is his account of last weekend’s ride on his loaner tri-bike. —Matt

My ride actually started yesterday at about 1pm. That is when I was at the local bike shop to pick up and borrow the owner’s son’s time trial bike (aka Tri-Bike) that he is going to sell me. While there, he took the wheels off, because apparently they cost more than my Jeep. No, not more than my Jeep’s wheels — the entire Jeep. 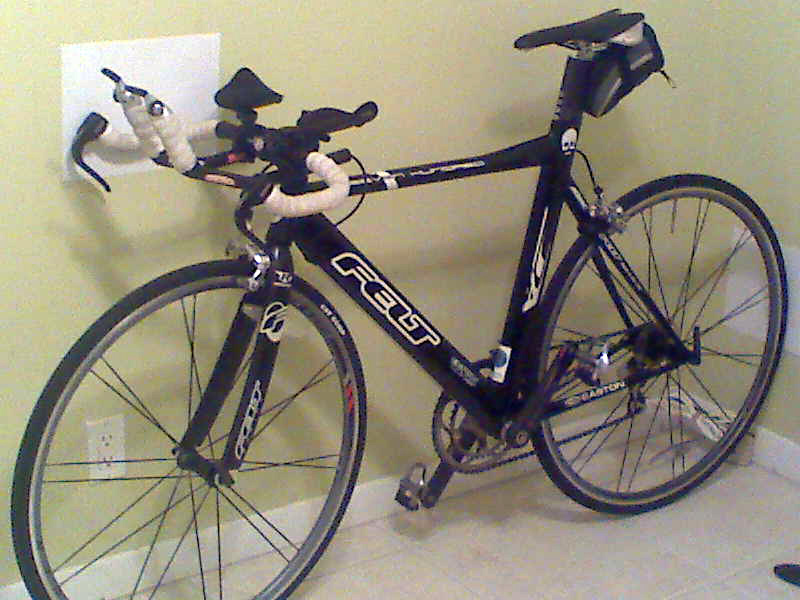 Always Pack Your Own Parachute

Anyway, while he was putting on the other wheels the conversation went down like this:

Owner: Hey Wrench, I grabbed some tubes from under the bench. Are they the good ones or the bad ones?

Owner: I think I grabbed them from the front but I’m not sure…

At that moment, I thought, ‘Danger, Danger’. Do I ask him to double check the tubes? I mean, he’s letting me borrow a $3,000 bike for free. Who am I to complain?

Water? Too Heavy. Who Needs It?

Fast forward to today at 12:30. I leave my house with no water bottle (no cages on the time trial bike) and no computer to provide a metric to compare the road bike to the tri bike. About 6 miles into the ride, the front tire is dead. I spend 15 minutes changing the tire out. At least now I know I can do it if I’m in a race… Get back on the bike and about one mile later the back tire is flat. I’m out of tubes and CO2. I tried using the hand pump but the tire was not holding the air…

So, about four miles from the local bike shop, I started walking. In my Shimano ‘duck shoes’. A fellow biker stops to help. Turns out it’s my friend Chris from the Palm Beach Road Runners. He offers his tube and CO2 but I’ve decided at this point to go back to the local bike shop so I thank him and keep walking. He also gave me some good advice about foam rollers (he’s a doctor) and didn’t charge me a co pay. What a great guy!

About 200 yards from when Chris leaves I flag down a Jupiter Police officer. He can’t help because his trunk is full of guns or something so he calls a fellow officer who has a bike rack on his Police SUV and this officer saves the day. He drove me to the local bike shop (the air conditioned air was awesome) and we shared some bike stories.

In and out with two fully-inflated, non-leaking tubes. Yeah!

Fast to Faster: It Is About the Bike

So about the time trial bike… I freakin love it! I guess it’s the geometry. It kind of feels like you are in a very aggressive position. Almost as if you are going to fall over the handlebars. It uses a completely different set of leg muscles. I felt as though I was really pushing and driving down on the pedals compared to the road bike.

At any rate, my legs felt awesome and I felt (although I can’t compare since I had no computer) as though I was going much faster. And much smoother. No parts of my body went numb, either… The shifters are right at the thumbs and they move up and down, so the shifting is really easy and smooth. The shifter, that changes the ring you are on, is a resistance shifter and is WAY better than what I’ve got on the road bike. For me, that is. It only has two chain rings but I never needed the highest or the lowest. It was a very nice ride considering the circumstances. I have a new love for this type of ride. Completely different experience and one that I prefer over the road bike.

I’ll have to check with some Tri peeps to see if it is a good idea to change this close to the MiamiMan. Since it is different muscles and I’ve spent the last six months building the ones that I won’t be using anymore, I wonder if it is a good idea… If it won’t completely screw up my training, I will own a Tri bike within the next couple weeks… :-)

All in all, I went from my house to Coral Cove Park and back in 3.5 hours. With two flats and a ride in a police car, that’s not too bad…

As sweet as the Felt sounds, I’m a big fan of Scott’s second choice. It even has his name already written on the frame… 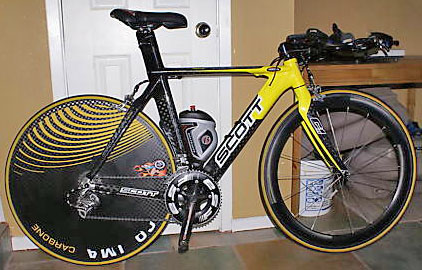 Are you selling your triathlon bike and want to pitch it to Scott? Know anything about the Felt? Like another brand or style better? Got any ideas how to go faster? Let us know in the comments below. —Matt