Unless a substance is banned by Union Cycliste Internationale (UCI), cycling’s governing body, the substance is probably not worth using. If a pill you purchased at the local running or cycling shop actually made a measureable improvement in performance, why wouldn’t it be banned?

Over the years, I have read a lot claims from supplement manufactures and they all seem like total fantasy. I’m a skeptic to say the least. It wasn’t until last year that I came to believe that Gatorade instead of simple water might be helpful on longer (over 30 mile) rides. To this day, I feel like an idiot for taking a generic multivitamin every day.

A Monday morning in August, I arrived at work to find a small baggy of non-descript pills on my desk. They only note attached was ‘sportlegs.com’. They were from Scott.

Scott is our resident marathon man and overall athletic overachiever. He is a runner who has completed a number of marathons. In May he bought a bike and since then he has pounded away more miles more quickly than any of the Palm Beach Bike Tours staff. Since July, he has done two triathlons and has a half-Ironman scheduled for November.

In any case, when Scott drops something on my desk, I don’t immediately laugh in his face.

Scott’s testimonial was simple: a few of his triathelete friends recommended SportLegs so he tried them. After running eight miles on Sunday, he felt as though he could run another eight miles. That evening and the next day, he felt great and didn’t cramp up. Coming with Scott’s seal of approval, I gave them a try.

I picked my 30-mile Saturday ride as the test. Having done it just about every Saturday since May, I have a good idea about how long it takes and how I feel afterwards.

First, let me tell you what SportLegs isn’t. It is not a performance enhancing substance. I wasn’t any faster because I popped four SportLegs pills before the ride. My turns at the front may have been a little longer but at no point did I feel as though I wanted to pick up the pace. (We generally cruise at 18-21 miles an hour.)

On the other hand, I felt as though I was coasting the first 20 miles. My cadence was hovering near 100 RPM instead of my usual 85-90 RPM. Turning the pedals felt effortless. At the end of the ride, I wished I had time to loop back and do it again. At no point did my legs give me the little twinges that indicate pain or cramps to come.

My effortless 30-mile test was on an exceptionally nice day — 78 degrees instead of the usual 91 degrees. Still, the results were good enough to give SportLegs another shot. The second test would be on my own dime.

Speaking of my own dime: Ouch! A 120-capsule bottle of SportLegs costs about $25. You take one capsule per 50 pounds of body weight per two- to three-hour period. The $25 buy-in was difficult to swallow for a still-unproven product. But, I went ahead with the purchase. (Doing the math in my head, each pill is about 20 cents. For me, $1 a dose, give or take.)

What is This Stuff?

Apparently, the magic is the ‘lactate’. Other supplements use lactose. What does that mean? I have no clue. The SportLegs web site has a chemistry lesson which I’m not even going to pretend to understand. 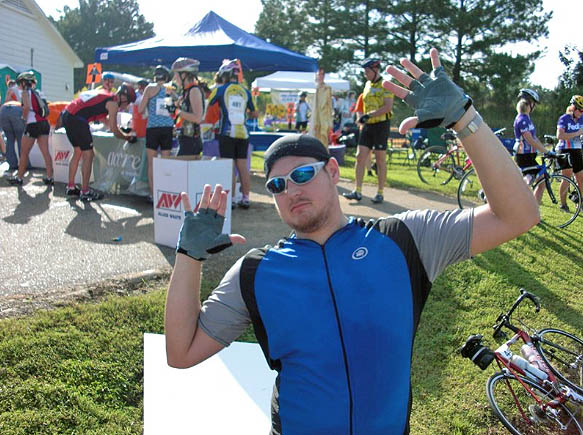 I foolishly signed up to do an MS-150 in Memphis this year with my Uncle Mark and the Bad Dog cyclists with whom he rides. Living in Florida, I never see hills. Memphis to the Mississippi river and back has a lot of hills. The Bad Dogs know hills. I was pretty sure I’d need a banned substance or two to keep up with them. Alas, all I had was SportLegs and a pocket full of Espresso Love GU Energy Gel

Surprisingly, I did very well on the ride.

On my flat as a pancake 30-mile local loop, I generally average 18-19 miles an hour. For Saturday’s 77.5 miles of rolling hills and 20 mph sustained winds (thank you Hurricane Ike), I averaged 16.1 miles an hour. To lose just two miles an hour in the hills and over a distance more than twice as long is really good.

Best of all, I wasn’t beat when I got to the finish line. My legs didn’t cramp either on the ride or afterwards. Unlike previous long rides, I didn’t wake up in the night with cramping legs. The next morning, I felt great.

Unfortunately, Hurricane Ike arrived in Memphis Saturday night. By Sunday morning winds were holding at 40 miles an hour, it was raining and the ride officials closed the course. I’m sorry I missed the opportunity to see if I could do day two with as little suffering as day one.

After these two limited tests, I’m inclined to say there is something to SportLegs.

After both test rides, I felt good and as though I could go further. I didn’t cramp up, and I seemed to have recovered quicker. On short rides, I’m not sure you will see much benefit from the supplement. On longer, endurance rides, I’m confident you will ride easier.

There are probably similar products out there that do similar stuff. If you know of a product similar to SportLegs that works as well or better, let us know in the comments below. If you think SportLegs is a total waste of money, please let us know that, too.