One of my favorite rides is the 26-mile stretch between the Mississippi River town of Cape Girardeau to the German settlement of Altenburg, located on a high ridge.

View Cape Girardeau to Altenburg Bike Route in a larger map
[Note: the larger map IS easier to read.]
There are enough hills to be a challenge to a flatlander from Florida, but they aren’t so steep that they are demoralizing. The stretch from Altenburg to Highway 177 was part of the 2009 Tour of Missouri bike race.

Greeted by a vintage bicycle

I stopped in at the Lutheran Heritage Center & Museum to do some research. How could you NOT stop at a place with an unlocked vintage bike at the entrance? 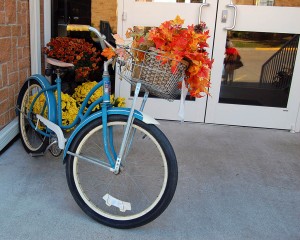 The friendly folks at the museum were more than helpful. One of the members was under the weather, so he sent his son, Gerard Fiehler, to fill us in on area history.

Carolyn Littge looked at a picture I had shot in the 60s that was labeled “Wittenberg School.” She had no trouble identifying the building. “I not only taught there, but I closed the school down.”

I had taken a picture of a local couple and their visiting friends earlier in the week when they discovered their camera was out of film. I had prints made, but discovered that I had misplaced their mailing address.

Only in a small town could I show the picture to someone and have them recognize the couple and offer to see that they got the prints.

The Aprons of East Perry County

The museum has some wonderful exhibits, but the most eye-catching display was The Aprons of East Perry County.

Many organizations produce cookbooks for fund raisers, but this group decided to have the folks who contributed recipes also bring in their vintage aprons for display. 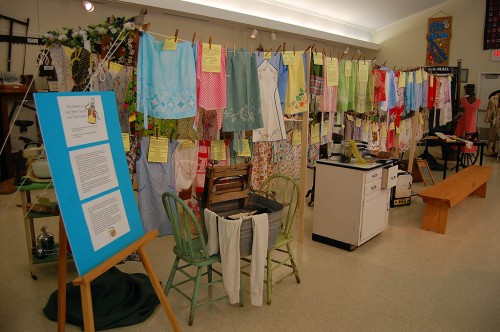 Most aprons were made before 1950

I was surprised to find that some of the aprons I thought were made recently because of their color patterns and the brightness of their colors were made in or before the 1950s. 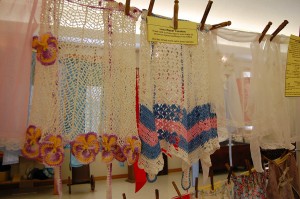 A local tradition was for the bride’s family to to make aprons for the regional women who served at the wedding reception tables. Men serving beer would sometimes wear floral or or lace-trimmed beer aprons that matched the wedding motif.

These crocheted aprons were made by Lena Weber Leuders, who also served as the local switchboard operator.

The apron exhibit will come down to make room in early November to make room for the 5th Annual, “Luther’s Indoor Walk in the Woods.”  There will be more than 40 decorated/themed trees on display after November 15.

The museum’s web site has a great story about Altenburg’s Bucket Brigade, a group of women who have been working as house cleaners for more than 40 years. The youngest is in her 50s and the oldest is in her 80s.

3 Replies to “Cape Girardeau to Altenburg: My Favorite Ride”