Brother Mark and I woke up to temps in the low 40s Saturday. Even HE wasn’t ready to hit the road until the thermometer thawed out. He had to be in St. Louis for a concert in the evening, so we decided to do a short historical ride, starting in South Cape Girardeau. 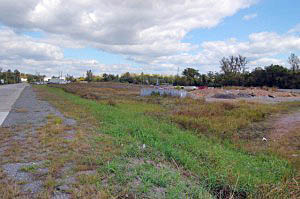 When I worked at The Southeast Missourian, South Cape was the euphemism we used for what everyone else in town called Smelterville (or, going back even more, Leadville). It was in the area of town that frequently flooded and was inhabited almost exclusively by poor black families.

While I was still in high school, I launched myself into a daring anthropological expedition to venture into Smelterville with my camera. If I wasn’t on the road, without access to them, I’d stick in some of those old pix. I think they stand up pretty well.

None of the dire things I had been warned about happened. Instead, I found myself and my camera being invited into homes and I discovered something that served me well throughout my whole newspaper career: most folks are pretty darned nice if you treat them with respect and dignity. 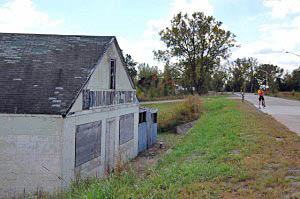 You can’t fight the river

Old Man River took its toll over the years. More frequent and worse floods damaged many of the homes beyond repair; the roadbed passing through the community was raised and white flight to the suburbs opened up housing nearby that didn’t go under water. In 1996, after two “100-Year” floods in 1993 and 1995, many homes qualified for a government buyout program.

I didn’t see a single home in the area on this trip. Only the roof of this old furniture company sticks up above the roadbed.

I miss the Blue Hole

A green house trailer sits where the Blue Hole Restaurant used to serve up the best BBQ sandwiches in the area. I can remember going with my dad in his truck and wolfing down Brown Hots served on authentic Coca Cola metal trays.

The place was named after the limestone quarry next to it. When it filled with water, it looked like a Blue Hole. 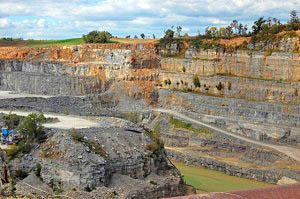 The quarry provided limestone for the Cape Cement Plant (since sold and renamed numerous times), once one of the largest employers in the area. Back before anyone ever thought about pollution control, the cement plant would billow out huge plumes of white dust that would cover everything for miles around.

The quarry started as a deep pit, and then was mined horizontally, leaving huge stone pillars to support the roofs. Back in the days of the Red Menace, I covered a city council meeting where it was discussed that those deep caverns would make a great fallout shelter.

How long can you hold your breath?

“Remember that they used to call that the Blue Hole because it fills with water if it’s not constantly being pumped out? How long do you think we could hide in those holes if the quarry filled up?” I asked innocently.

I never heard any mention of quarry-based fallout shelters again.

About 30 or 35 years ago, the pillars were blasted out and it changed to a deep pit quarry again. I managed to talk my way into the caverns to document them just before they were blown.

Everyone in Cape has heard of Fort D 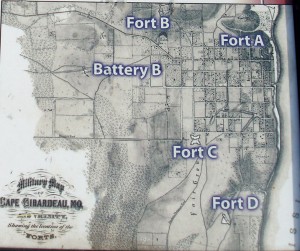 Nobody ever goes to see it, but they’ve heard about it. Larry J. Summary posted this image of Cape’s forts. Fort D is the only one that has survived.

The site is nicely landscaped and the fort itself looks good until you notice that it has no roof.

Scott House, a retired teacher, and a member of the city’s Civil War Round Table, is leading an effort to interpret the fort’s history. 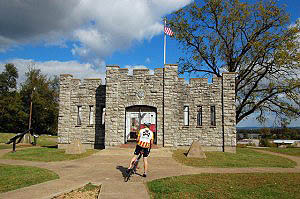 The forts were ordered built by Gen. John Fremont, the Western Department’s Union commander in St. Louis. Fremont dispatched a contingent of engineers to the town to lay out the forts. Assisting in the project was an officer, John Wesley Powell, who after the war would earn a name for himself exploring the Colorado River and the Grand Canyon.

Built in the summer of 1861, the four forts formed a crescent along the outskirts of town. House said a copy of an 1865 map drawn by Army engineers, now in the Library of Congress, provided a period look at the forts‚ dimensions and their proximity to the town.

Fort D had a palisade on one side with cannon emplacements and rifle pits. It also included “Quaker cannons” — logs carved to look like cannons. House said the name came from the Quakers, “a religious group that generally declined to fight during the Civil War.”

House believes the faux cannons were probably the result of boredom and built for amusement. 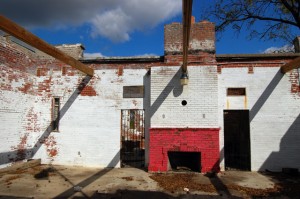 House, who also works part time for the National Park Service, said life for the men who served at Fort D was never too exciting.

“As far as we know, they never fired their guns in anger,” he said.

Soldiers at Fort D, trying to occupy the long hours, ended up carving bowling pins and used one of their 32-pound solid-shot cannon balls as a bowling ball. According to House, one of the soldiers, Benjamin Radford, noted the bowling ball “gave strength to our arms.”

“You know you’re in the backwaters of the Civil War when you are using your cannon balls for bowling balls,” House said.

There’s an old joke about an antique shop that advertised itwas selling George Washington’s axe, maybe even the one that he used to cut down the famous cherry tree.

“That axe looks like it’s in awfully good condition for being that old,” a prospective customer remarked.

“You have to understand that it’s had three new handles and two new heads since George used it,” the shop owner countered.

That’s the way Fort D is. I commented to Mark that the foundation was concrete, not the stone that I would have expected from Civil War construction. It turns out that the American Legion saved the site from development by buying it in 1936. The building we were looking at was a WPA construction project in 1937.

It’s a beautiful site and the interpretive plaques do a good job, but it sure feels like Washington’s axe when you hear the rest of the story.