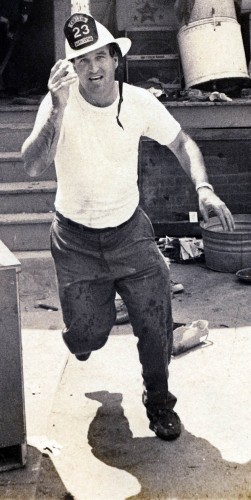 Bill, 47, complained of being tired, feeling lousy and having some minor chest pains on Monday and Tuesday. The pain wasn’t radiating down his arms in the classic symptom of a heart attack, so he went to a regular doc instead of the emergency room.

His doctor sent him to a cardiologist for more tests.

During the test he had a full-blown heart attack

By the time everything was done, it was discovered that Bill’s left descending artery had a 99% blockage and another was at 80%. The next day more tests found that he’d had a “silent” heart attack in the past two months and that two more arteries were blocked and there might be problems with two others. He ended up with six stents.

All in all, things turned out OK.

“I’m running around with a six-pack, legally,” Bill quipped. “I feel great — a little tired, but it’s good to be alive.” He was released a day early and is up and around, already driving short distances and eating low-fat foods.

Sally passed on these good pieces of advice from her son, who is a paramedic-firefighter:

In another message (and this will show you why we’re calling her Sally instead of her real name) she added,  “I have read that an old-fashioned toilet plunger also works very well as a chest massage especially on large people on whom chest compression is difficult….but who the hell has those except restaurants — and maybe private homes?” 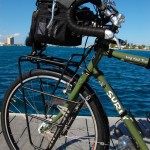 I have quite the reputation for carrying the kitchen sink on my bike, so I replied, “You’ve never seen my folding toilet plunger? It works like my Click-Stand. I don’t carry it anymore since I found a portable defib unit on ebay cheap.

“Are you serious? And did you have it for that reason?” she asked.

Of course I was serious

When a fish is nibbling this hard, every fisherman knows to be patient.

“Sure. The mechanical advantage the handle gives makes it much easier to do chest compressions, which means you could perform CPR for a much longer time,” I responded.

Now she wanted to know about the defibrillator 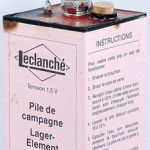 “Does the portable defib have to be plugged in or does it run on batteries?” she wondered.

“Batteries,” I replied. (I thought she’d finally get wise when I sent her this link to a REAL wet cell battery.)

How about solar batteries or your bike generator?

Nope, even with the link she still had not a clue I was pulling her leg, based on these follow-up questions:

“…but 10 hours to charge. (guess you could plan for the emergency and charge it up night before.)

“Or, just have a real live battery aboard when you’re out in the field.   Wonder about solar batteries — or what about putting your bike on a kickstand and pedaling to run the generator? (Cables needed, of course.)”

You’d be better off pedaling for help

I treated her suggestions seriously: “The wet cell is for emergency backup only. Solar chargers are too slow. Ditto bike generators. If you were going to pedal your bike to generate that kind of power, you’d have to pedal so hard and so fast that your energy would be better spent riding for help.”

I’m waiting for her next question.

And people wonder how spammers and Nigerian scammers make any money…

7 Replies to “Cycling and Heart Attacks”