The Space Shuttle Endeavor’s crew and I both took a ride this weekend. Clouds and low ceiling postponed their launch, but it was a picture-perfect liftoff 24 hours later. Here’s what it looked like from our front yard in West Palm Beach, FL.

Sorry for the bumpy video. I crawled out of a nice, warm bed at 4 in the morning to find temps in the mid-40s and I hadn’t bothered to grab a tripod. I wish I had. The shuttle was visible for a longer period than I can remember seeing any other flights.

My luck wasn’t so good

The mid-day temperatures on Saturday were great – in the low 70s – but the winds were brutal. They were 19mph sustained, with gusts into the mid-30mph range. They were mostly out of the west, so we decided to cruise some of the inland streets that my new riding partner, Osa, hadn’t been on.

She saw the house we rented when we moved to Florida in 1973. It still has a big tree in the front yard that we planted when Son Matt was born in 1975. We were afraid that a cold snap had taken it out about 10 years ago, but it’s doing great. 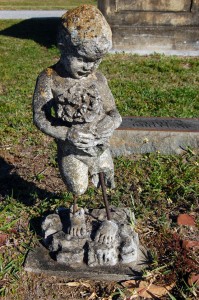 Some of the neighborhoods we rode through show tremendous improvements from the 80s when you could buy crack on almost any corner and drive-by shootings were common. The area has really turned around.

Osa had never been in Woodlawn Cemetery, where many of West Palm Beach pioneers are buried. It’s also the final resting place for 69 victims of the 1928 Hurricane that killed thousands in The Glades. Sixty-one of the 69 victims are white. When the scope of the tragedy became clear, non-white victims were turned away from Woodlawn. Nearly 700 other black victims were buried in a mass grave near 25th St. and Tamerind Ave. The grave has been neglected until recent years.

When we made a turn in the cemetery, the bike handled badly. I looked down and saw the rear tire was nearly flat. That was Flat One. 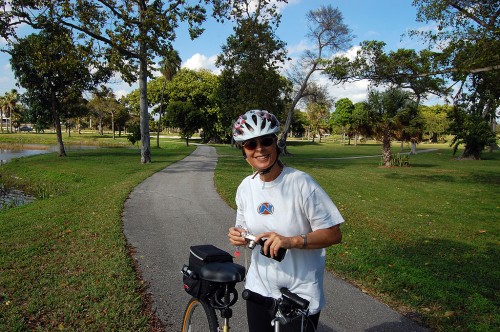 After replacing the tube, we started off on another ride to Dreher Park, where I shot this photo of her. After cruising around the lakes on the north part of the park, we hit the south side, which has what passes for hills in West Palm Beach.

Osa chased down an ice cream truck. I thought my bike handled a little squirmy when we stopped for the break, but I was more interested in snarfing down an ice cream sandwich. When I got back on the bike, the FRONT tire was half flat. That was Flat Two.

There was enough air to make it home, but the bike really handled badly. Another few blocks and I’d have walked it home.

When I got home, Son Matt was building a garden for this mother in our back yard. When I started describing my flat problems, she said, “You didn’t have two flats today, you had three. The right-rear passenger tire on your car was flat, too.”

Good thing I wasn’t on the Endeavor crew. It much be a real bear to change a flat on that thing.

3 Replies to “Endeavor Didn’t Have Any Flats”