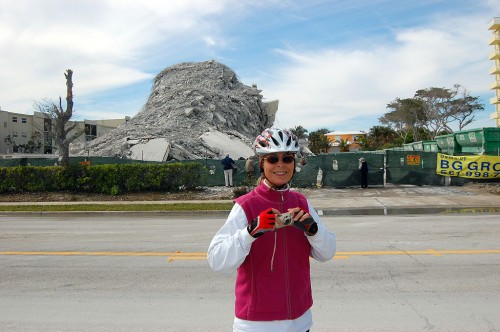 I mentioned last week that I had a problem with flat tires. Well, over the years I HAVE had a couple of blowouts, but nothing like the one on Valentine’s Day in West Palm Beach.

Just a few hours earlier, that 42-foot pile of debris behind Osa had been a 30-story condo damaged by two hurricanes. At a few minutes past 9 A.M. on Valentine’s Day, it took about 10 seconds for 2,000 pounds of explosives to pancake the building. You can see a video of the implosion on this TV station’s site.

I decided that it wasn’t worth fighting the crowds to see the explosion (plus it was chilly), but Osa and Chuck and I cruised by the site that afternoon.  [I could have used a picture of Chuck, but I looked at Osa. Then I looked at Chuck. Yep, no contest, even if he WAS riding a bent.]

How to fix a flat tire

After my flat tire experience last week, I decided to let Wayne at Bicycle change my front tire so I could video the process for those folks who are a bit intimidated by the thought of doing it on the side of the road. Wayne was kind enough to let me shoot a video of him building a wheel around my SON generator when I first bought my Surly Long Haul Trucker last year, so he was OK with shooting the flat fixing.

I’ve been lucky enough not to have so many flats that I’ve gotten proficient or fast at changing them. I’ve done it – on one memorable ride on the Lake Okeechobee Scenic Trail when I flatted at Mosquito O’Clock – but I figured I’d let a pro do it on camera. Plus, it’s about as easy to film yourself changing a tire as it is to change a tire while swatting mosquitoes with both hands.

Some of you may question why Wayne said that he was going to discard the tube because it had been punctured. Why not patch it?

Wayne’s perspective as an LBS owner is that the customer will always blame the patch if there’s ever a flat on that tire in the future. He’s perfectly happy to give you the old tube back if YOU want to patch it, but he always installs new tubes. 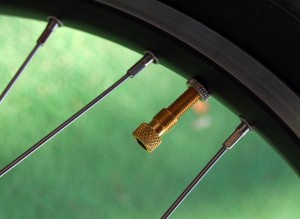 Wayne prefers to adapt Presta valves to the automotive Schrader format when he’s working with tubes.

(Note: the adapter is installed upside down here on my tire. I keep it that was because it’s easier to take off.)

If I’m home with my Blackburn floor pump, I’ll use it in the Presta mode. If I’m on the road, I’ll use the Schrader adapter for my Topeak Road Morph with Gauge or my CO2 inflator.

That keeps me from having to switch heads around and lessens the chance of damaging the Presta valve stem.

9 Replies to “How to Fix Your Bike’s Flat Tire”