Building a wheel is easy if you know what you’re doing. I don’t, so I turned to Wayne at Bicycle in West Palm Beach when I wanted my SON generator hub built into the front wheel of my new Surly Long Haul Trucker. (Wayne and his shop, Bicycle, are one-name entities, like Cher or Paris.)

I promised back in January that I’d post a video of the process when I learned the rudiments of how to do it.

Wayne builds a 26″ wheel around my SON generator

Wayne took the hub off the front wheel of my old Trek 1220, where it had been whirring away without a problem for four or five years. He ordered a 32-count Alex Adventurer 26-inch rim similar to the one supplied on the Surly Long Haul Trucker Complete. The original wheel is a 36-spoke-count rim, but the SON hub is a 32, so I had to send the first wheel back. I also needed spokes, nipples and Wayne.

Total cost for the new wheel (excluding taxes and shipping) 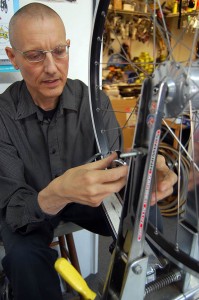 I’ve been riding it for almost eight months now and it’s still running straight and true, despite potholes and railroad crossings.

I’m not surprised. This is the third wheel Wayne has built for me.