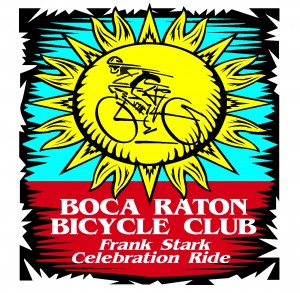 I’m going to have to put together a list of coming events. I KNEW that the Boca Raton Bicycle Club always sponsors the Frank Stark Celebration Ride in July, but exactly when slipped my mind until Son Matt reminded me that advance registration closes July 9.

Here are the details. There are two routes: 62 miles and 30 miles.

Who was Frank Stark?

Frank Stark was a member of the Boca Raton Bicycle Club. He was a former airline pilot who was forced to retire after quadruple bypass surgery and two heart attacks.

As part of his rehab, he took up cycling and celebrated his birthday by riding  a mile for every year of age. Before long, it became a club event, with as many as 1,000 riders showing up.

Not a bad way to go

Frank died of heart failure while riding his bike, just a month before his 71st birthday. The club has been doing a ride in celebration of his birthday for almost 20 years.

I rode the Frank Stark only once (inadvertently) 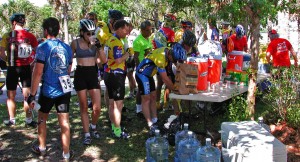 I took off on a ride in July 2001 and turned south on A1A from West Palm Beach. All of a sudden I started running into hordes of riders.

I pulled into a rest area where I saw a bunch of activity and found out the background of the ride. They had some of the best-looking iced watermelon I’d ever seen. I confessed that I wasn’t part of the ride, but the person staffing the stop said to help myself anyway. I tossed ten bucks into the pot (all I had) as a donation and left refreshed.

The main thing I remember about that ride was getting caught in a rainstorm on the way back north. I swear that you could hear the raindrops sizzle like they’d been dropped on a hot griddle when they splashed onto the hot blacktop.

Then, just as soon as it started, it stopped. Instead of cooling the air, it created a hot steam bath that gave me a lot more sympathy for the lobster in a pot.