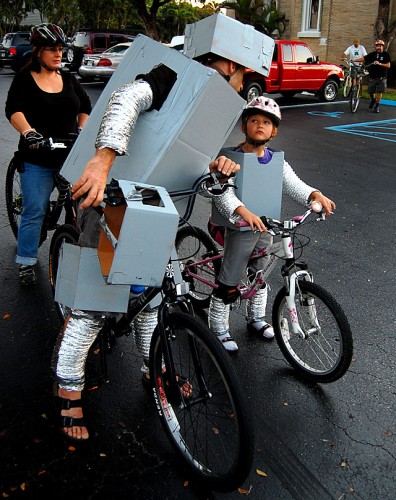 Wednesday was a perfect night for the West Palm Beach Freakbike Militia’s ChopperNite 31, also known as Robot Nite. It was cool without being chilly and the winds were calm.

Even better than that, everybody was in a good mood. One of the first cars I passed had a woman in it who was laughing, pointing and waving. 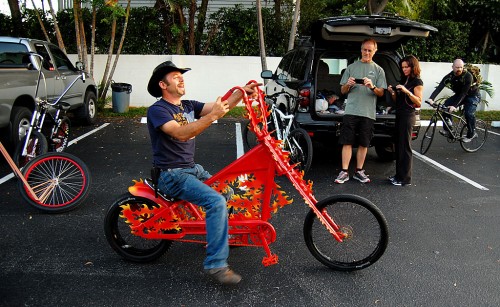 The “corkies” who ride ahead to “cork” or block intersections also said they got good vibes from the motorists they were holding back. They’re getting better at this every ride. By dressing in reflective vests, looking semi-official and acting like they know what they’re doing, drivers assume that the ChopperNite must be some kind of officially sanctioned ride. How little they know.

Fountain area cleaner than before

TIII, the fellow on the cargo bike leading the group in the video said he and some volunteers stuck around after the main group headed out to make sure the Clematis Fountain area was cleaner than when the group arrived.

I’m a little light on still photos this ride because I was concentrating on shooting video with one camera mounted on the bars and one mounted facing to the rear from the rack. You’ll hear me say that one shoots biker butts; the other, biker faces. Next ride I’ll try to move around more to get a larger selection of riders.

I didn’t know until I edited the film that I had captured a crash at about the two-minute mark. You can hear someone say, “She’s good!” so I hope all the rider got was a little road rash and a red face from embarrassment.

Click on any photo to make it larger, then click on the left or right side of the image to move through the gallery. If you’d like to see past photos and videos from other ChopperNites, follow the links on my promo page.