Depending on who was counting, at least 202 riders participated in the West Palm Beach Freakbike Militia’s Halloween Choppernite XXV Oct. 28.

I was on vacation in Missouri and couldn’t make the ride, but Wife Lila, Son Adam and friends Jan Norris and Jimmy Barron filled in for me, taking notes, shooting stills and video. My thanks to them. Now that I know how talented they are, I may disappear more often. 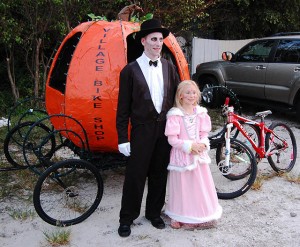 The Princess’ pumpkin coach was a great winner. It was constructed by Troy Zimmerman, who “drove” it – and who was dressed as a ghoulish footman. The Princess was his daughter, Emily Zimmerman, 8.

Troy said: “It took about three weeks to make it. It’s made out of PVC pipe, heated and bent, and welded iron curlicues.” Paper mache was the covering; the coach wheels all are from bicycles, spray-painted black.

The main bike was a Penny Farthing bike that had been sitting around the Village Bike Shop and they didn’t know what to do with. It made an excellent “tractor” for the coach. Lights on the coach were electrified by a generator on the back. 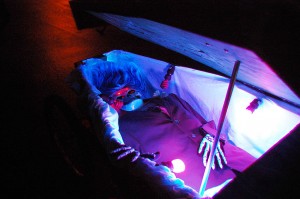 The Grim Reaper pulling the casket was a winner with everyone — except for the Southern Blvd. Bridge bridgetender.

Brett Strnad trailered a casket he made of wood and steel, and used 12-volt inverters to power the twin eco-friendly purple lights that lit up the casket. The lid was propped open as he rode with a steel rod.

The coolest part was the SCUBA tank attached under it all to power a boat horn that had the Southern Blvd. bridgetender honking in reply to Strnad’s honks, which were earthmoving-loud. 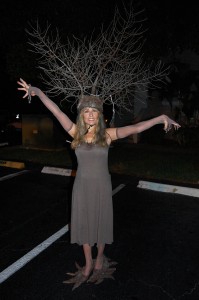 A dead tree with a witch plastered to her back.

Her biggest concern was how she was going to pedal her bike with feet that looked like tree roots.

Her husband, Jerry, came as Wolfman. (Or, would that be Wolfeman?)

Alan Steele was a pirate

Alan Steele created a pirate ship out of “cheap and easy” cardboard in the front and wood behind. “Wood would have been too heavy overall.”

When you click on his shot in the gallery, note his Barbie Doll masthead. 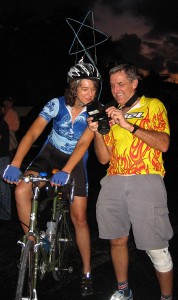 Lynn Daniels had a tall, lighted star on her helmet. You could see her for a long way off. She demonstrated her good taste by riding a Surly Long Haul Trucker. Stan Kilbas, of Wheels of Wellington and the FBM’s long-time event photographer is giving her a peek at her picture in one of the shots.

Stan’s an all-round nice guy who sold Wife Lila and me our Trek Navigator 300s that started me riding again back in 2001. He has a great memory. He walked up to Lila and said, “I sold you a bike,” even though she hasn’t seen him in at least five or six years.

Michael Getzie had the brightest ride 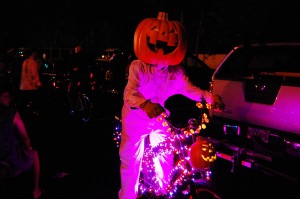 There must be a world-wide shortage of LEDs because Michael Getzie bought them all up to festoon on his rolling lightmobile.

Everyone I talked with wondered how in the world he was able to ride with the huge pumpkin on his head.

Visit the Gallery for more

Click on any image to make it larger. To move through the gallery, click on the left or right side of the picture.

If you want to see even MORE pictures, swing over to the Freakbike Militia site and see some of Stan Kilbas’s work.

If you want to see a ride in person, the FBM is already planning its next Choppernite for December 16. Watch this space for more info.

If we messed up your name, leave a comment and we’ll clean it up. If you’re wondering what the jb_, as_ and lps_ mean, those are the initials of the photographers: Jimmy Barron, Adam Steinhoff and Lila Steinhoff.