I’ve had my Garmin nüvi 760 GPS about a year. I love it. My wife accepts it. My kid borrows it. My brother bought one like it.

Read my Garmin nuvi 760 GPS review for my initial impression of the Garmin GPS that’s designed for use in an automobile.

I bought my Nuvi 760 just as the City Navigator North America mapset had come out, so I qualified for a download of the latest and greatest maps as soon as the unit came out of the box.

That’s why I was interested when I saw a posting in a GPS forum about a new lifetime subscription program from Garmin.

Yearly upgrades for Mapsource maps run about $75. Since I have two GPS units (and the maps can’t be used on more than one GPS), that can get expensive. 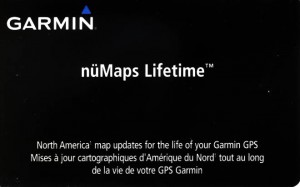 What comes in the mail for your money? A nifty thing that looks like a credit card with incredibly small type on the back telling you how to use it.

At first, I was confused. What am I supposed to do with this thing, hold it up to my computer monitor?

Down at the bottom of the card, on the back of the card, was a small section that looked like it was covered in hieroglyphics (that or funky algebra equations, they both always made about as much sense to me).

Feeling brave – or foolish – I reached for a sharp object

I started scratching at the symbols like you’d do with a scratch-off lottery card.

Actually, I won some frustration. The new program had gotten mixed reviews.

I have a fast internet connection and I’ve had enough experience with loading GPS units that items one and two weren’t an issue for me.

Connecting with Garmin WAS a problem

When I tried my download, I got a 404 message “The requested resource (/activatenumaps) is not available.”

After trying several times, I sent a message to tech support.

Thank you for contacting Garmin International. I checked the link today and it is working, I have seen this error when using AOL internet browser. Make sure you are using Internet Explorer.

It WASN’T the browser

When I tried my download, I wasn’t using AOL’s internet browser (what an insult). I had tried Firefox, Internet Explorer and Chrome. It wasn’t my browser.

Tech support nailed it when they said, “I checked the link today and it is working.” It WAS working today. It just wasn’t working the day I tried it the first time.

How does Garmin nuMap Lifetime work?

To quote Garmin, “Program entitles you to receive up to four map updates per year during the useful life of one compatible Garmin product or as long as Garmin receives map data from its current third party map supplier, whichever is shorter. Not transferable to another person or Garmin Product.”

nuMap Lifetime is a gamble

When I signed up for the subscription, I was gambling that

nuMap Lifetime isn’t THAT big a gamble for me

Garmin stuff is pretty rugged and this unit is used in a car, not clamped to my handlebar like my Garmin GPSMap 60CS, which has been jolted for thousands of miles in heat and pouring rain.

In less than two years I’ll have downloaded enough new maps and points of interest to come out ahead financially.

If  I do find another GPS that I just can’t live without, one of my boys (or Wife Lila) will get this one. There ain’t gonna be much in the will, so they better take what they can get when they can get it.

Where can I buy it?

I’ve had good luck buying GPS units, software and mounts from gpscity.com. They’re not always the cheapest (their shipping costs add to the price), but their support is good and they have lots of products.

You can also find it on Amazon, probably a little cheaper.