I set out this afternoon to do what Bro Mark and I call the Uncle Gus route because it goes past a farm owned by a distant relative. It was a great day for a ride: temps were in the low 80s, the sky was overcast and the winds were mild (but increasing). 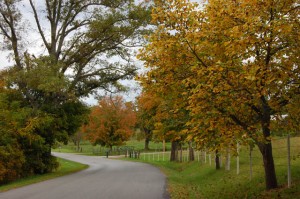 My mother lives on the top of a hill, so you start out fast until you hit a barricade at the curve at the bottom of the street where there is road construction. It’s paved, so you can dodge the barrier.

The first, gradual climb went OK. I thought that I may have remembered how to do this after all.

The muscle memory was there, all right. My muscles remembered that they get REALLY tired doing this.

Nothing around here has just one name. Depending on who you talk to, the road I was on is called Old Jackson Road (unless you’re in Jackson, where it’s called Old Cape Road), or Three Mile Creek Road (remember Cape LaCroix Creek from yesterday? Same creek.) On the map, it’s CR 620. At one time, it was the Houck Railroad. 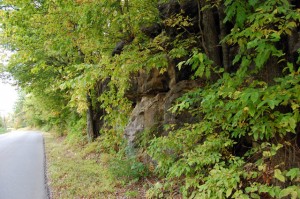 That brings us to this picture. Back in The Day, this was called the Houck Railroad Cut and was a path blasted through the limestone just big enough for a train to pass through. The railroad turned into a regular road and, in the 60s, my dad’s construction company was given the job to make the cut wider.

Someone misjudged the powder load and a huge boulder the size of a kitchen table was launched up, up, up until the law of gravity kicked in. It went right through the roof of a nearby house. No one was hurt, but it became part of family lore ever after.

The road has been widened again, so most folks who drive through there would never know to think of Louis Houck and his railroad.

What goes up comes down

If you check out the ride profile, you’ll see lots of pointy things. Those are hills. A lot of them are more than 12%.

It takes a lot longer to go UP those hills than it does to go down them. I stopped at the top of one of them to see that my GPS said I was at 524 feet above sea level. On the way down, I saw 37 mph on the speedometer. Unfortunately, when I finished coasting, I was at almost exactly 524 feet again and still had about another 150 feet of 12+% grade to climb.

A good time to take a picture 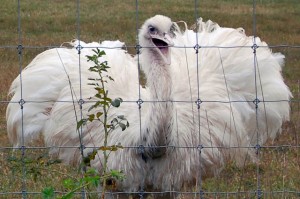 That’s when you decide to take a picture that sums up the way you feel.

This guy, along with his (her) brethren (sistern) flocked along the fence to gape at the strange guy gasping on the side of the CR 618. I’m assuming he, the deer, camel and other wildlife was part of 5H Ranch.

The next couple of hills weren’t fun. I decided that I must have left my legs in the luggage and I’d cut the ride short and pick a flatter route for my return.

A bridge I’d rather forget

Unlike most kids, I didn’t get my driver’s license on my 16th birthday. I opted to wait until the summer to go for it. Unfortunately, in order to qualify for discount on car insurance, I needed to go to driver’s ed, which wasn’t offered at that time of year. 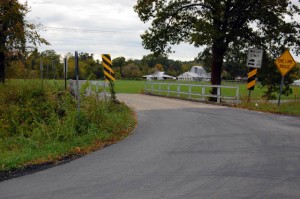 Our friendly insurance agent said he’d accept ANY teacher who could show me how to keep the car out of the ditches and Ernie Chiles was elected. Ernie wasn’t but a handful of years older than me, but he WAS a teacher and he accepted the challenge.

We climbed into the family’s 1959 Buick LaSabre station wagon, a land yacht of a car with huge flaring fenders in the front and fins in the back. It had everything except power steering, power brakes and air conditioning.

Ernie took me out in the country to gravel road CR 621, climbed out and said, “Have at it.”

What Ernie didn’t know was that about 150 yards down the road was this bridge, which was on more than a 90-degree turn and was covered with gravel. I couldn’t have been going more than about 15 mph, but that puppy went into a slide and bounced off the guard rail. I think Ernie and I would have been happier if we had broken through the rail and plunged over the side to our deaths.

I still slow down when I go across it, even on my bike.

9 Replies to “I Left My Legs at Home”