Southeast Missourian webmaster James Baughn does a blog called Pavement Ends where he writes about interesting natural places to see in SE Missouri. His April 23, 2008, blog on the New Madrid Earthquake caught my eye.

Little tremblors are common if you live in the area and predictions of The Next Big One come every decade or so. Kids hear about the New Madrid Earthquakes of 1811-1812 that caused the Mississippi River to flow backwards, changed the course of the river, created Reelfoot Lake and caused damage as much as 800 miles away.

It’s well worth the price if you are a history nut, interested in geology or watch reality TV about disasters.

I quickly found I wasn’t so much interested in reading about Pseudosesmic Landforms and Liquefaction as I was in learning that the Mississippi River used to run down the lowlands through Advance and Arkansas, with the junction of the Ohio and Mississippi Rivers being as far south as Natchez, MS, instead of Cairo, IL.

Makes sense when you look at a topo map 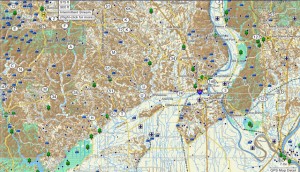 The Mississippi is the thin, blue line that’s meandering on the right side of the map. The lighter colors are the lowlands.

I had always heard that the high ridge that runs on the north side of 74 near Dutchtown was the old river boundary. Looks like the oldtimers were right.

What does this have to do with biking?

Seventy-seven pages into the  book, after addressing geology, history and neat disaster stuff, the authors produce the Interstate 55 Fault Finders Guide that will show you significant earthquake features on a mile marker by mile marker basis from roughly Scott City through Blytheville, AR. (They also point out that there is about a 30% chance of a small earthquake being recorded every day when you pass through this zone.)

OK, that’s great. But I can’t ride the interstate

The authors have six non-Interstate loops in the book. I picked the Benton-Sikeston Loop because it’s closest to home and put all the turns into my Garmin nüvi 760 GPS (full review). Because my mother always likes to go exploring, we hopped in her car and headed out on a scouting expedition.

Once you get to Scott City and get on Highway 61, the route is bikeable. I-55 has siphoned off most of the traffic, so I don’t think I’d feel uncomfortable on 61, even if it doesn’t have shoulders. Once you get past Benton and into Morley, the road has wide shoulders. 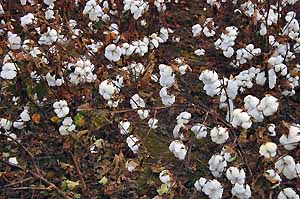 The backroads are good riding

The book takes you off on a bunch of side roads to look at specific land features. All of them were paved, in good condition and had hardly any traffic.

Fields of cotton will prove that the Missouri Bootheel is the Real South.

Will I bike this route?

The roads are decent and there are interesting things to see, but most of it involves riding on flat roads with no shade. I get enough of that in South Florida.

Even with the guide book, I’m not enough of a geologist to appreciate the subtle changes in the environment to recognize the significance of what I’m seeing.

Still, even I am fascinated to read that the Sikeston Power Plant was built astride a major seismic fissure where the ground split open and quicksand flowed in.

My mother and I DID discover one thing that made the whole trip worthwhile. I’ll cover that later in the week.