Friend Mathilde and I decided it would be a nice evening for a night ride on Palm Beach’s Lake Trail. We hadn’t ridden together since the LOST Full Moon ride where she did the Frog Dance two months ago.

The temps were nice after being at the broiling level during the day, traffic was non-existent and the winds weren’t all that bad. A perfect combination. 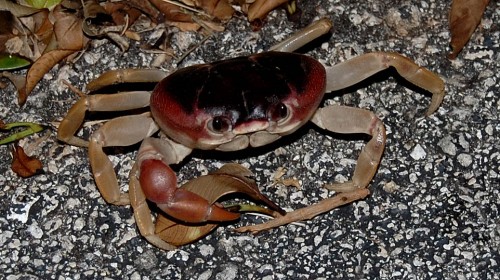 On our way back from the Palm Beach Inlet (the cops were putting the park to sleep just as we pulled up), I saw something in the middle of the trail. MP blew right on past, but I stopped to check it out.

“Is it a frog?” MP called back hopefully.

I could tell she was warming up for another Frog Dance.

I checked it out; It checked ME out

It was one of our many land crabs. They, like many other organisms in Florida, reach peak reproduction activity during the full moon in the summer.

MP remained unmoved by him (her?)

I guess she only identifies with frogs (she IS of French heritage, even though she claims she didn’t watch a single minute of the Tour de France this year).

I can remember seeing carpets of living and dead crabs on A1A along the ocean in years gone past. There was no way you could avoid them. I don’t know whether development, traffic or hungry crab lovers have taken their toll but it seems there aren’t as many of the crabs around as in the old days. 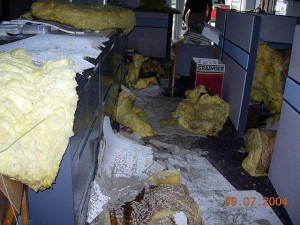 Hurricane Frances peeled back the roof on The Palm Beach Post’s bureau office in Pt. St. Lucie in 2004. Terry Williams, one of my telecom techs was dispatched to see if the phone system was salvageable.

He got to the office just before dark and picked his way through debris and watersoaked ceiling tiles by the glow of his flashlight.

He had just reached the spooky bowels of the building when he heard something moving.

He’d take another step, stop and listen and the sounds would start again.

“It was just like in the horror movies where you’re sitting at the edge of your seat screaming, ‘Don’t go in there. Don’t open that door.'” 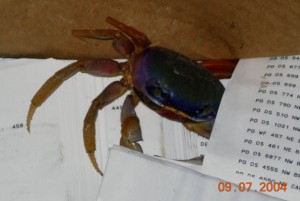 It was a HUGE crab. And it was waving his claws menacingly at him.

Terry knew that land crabs are naturally shy and pose no threat to humans unless caught and handled.

Terry just wasn’t sure that the CRAB knew that, particularly since this crab had lots of buddies taking over the office with him.

Telecom Techs are made of strong stuff. Ignoring visions of being picked clean and leaving nothing behind but bones and his toolbelt, he made it to the phone room where he determined that the only place in the whole area that the ceiling HADN’T come down was right over our equipment.

He opted to return in the daylight to salvage it. I couldn’t blame him.

[Note: Terry shot the two pictures at the bottom of the page.]

2 Replies to “Invasion of the Land Crabs”