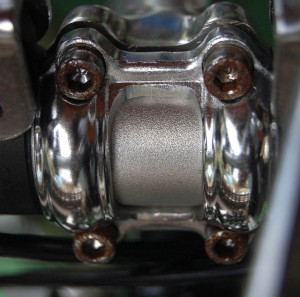 Everything checked out OK, except that he noted some rust on two stem face plate bolts.

I wrote back to tell him that mine were showing the same thing and that I’d replace them with stainless steel bolts at first opportunity.

My LHT is a Short Haul Trucker

After reading Aushiker’s account of 500 km service, I almost didn’t weigh in.

It causes me to confess that my Surly Long Haul Trucker just turned over 500 miles.

That’s pathetic. I’m waiting for the Surly folks to take it away from me for being unworthy of the name Long Haul. 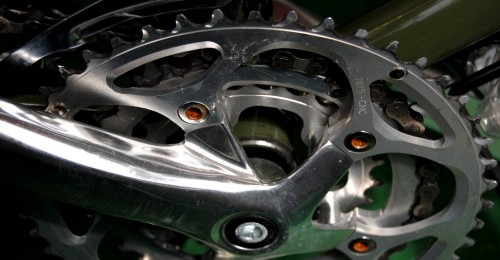 When I had my bike up on the rack this weekend mucking with the ring lock, I had a chance to look everything over more closely.

That’s when I saw some rusty b0lts on the cranks (above) and on the brakes. 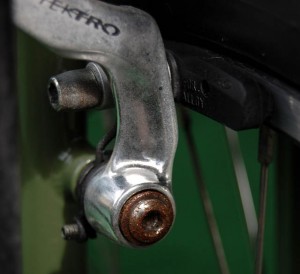 Salt air is all ar0und us

I make it a point not to ride through any puddles that I KNOW are saltwater, but some exposure is unavoidable. I’ve written before about how we’re surrounded by salt air, even though I live a couple of miles from the Atlantic Ocean.

I’ll replace the bolts that I can and keep an eye on the rest. It’s no big deal, but I hate to see rust. Of course, I guess I could just say that rust builds character, like it did on my brother’s old Sears Spyder.