A kidney stone and hot, humid rides in South Florida were what moved me to get more focused on hydration.

The CamelBak M.U.L.E. holds 100 oz. I have sucked it dry on some rides, but I don’t know that I would want to carry any more weight than that. You can almost always find a place to refill before you go dry. 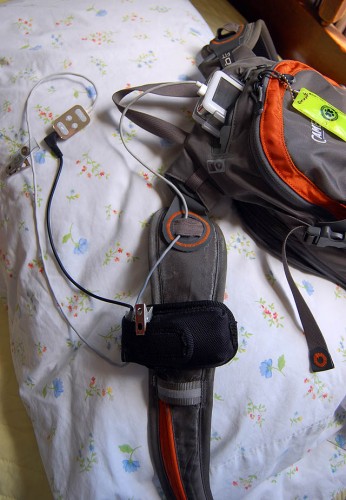 In addition to the water, I carry my wallet, cellphone, Schrader / Presta adapter, allen wrench and extra Vistalite flasher on or in it. I like the idea that if something would happen (like a bikejacking) that the wallet and cellphone are on my back instead of the rapidly-disappearing bike.) I added a tube director primarily to keep the first gulp of water a little cooler, but I’ve gotten to like the mouthpiece living where I just have to move my head a little to pick it up. If I’m not on my bike, I’ll throw in a CO2 inflator, a few more tools and some snacks.

I’ll still carry a water bottle either to refill the Mule or to pour over my head. It’s not uncommon for the water bottle to get so hot that it’s not refreshing, though.

Maybe I’ve just gotten used to the weight, but that was never an issue with me. The insulation / wicking is good enough that it has never felt cold against my back in the winter (such as we have down here) nor has it been noticeably hot in the summer (which we have for about eight months of the year). I’ll always yank off my helmet when I stop, but I usually don’t bother to pull off the Mule.

I’ve never put anything but water in it and I drain it and hang it up with the expansion hanger after every use. Since it gets used several times a week, it doesn’t suffer from the corner-of-the-closets-crud.