When I headed back to Cape Girardeau for my 60s Decade High School Reunion, I stuck my Surly Long Haul Trucker in the back of the van. June in Missouri ought to make for great riding, right?

Classmates got to reconnect 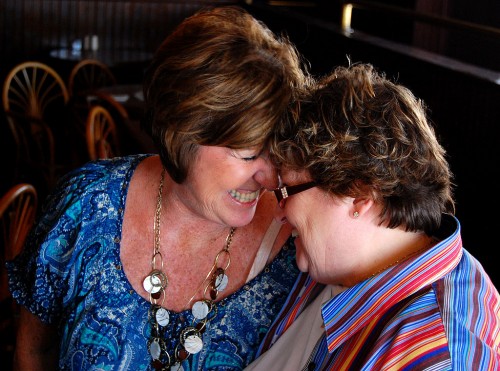 The reunion was much better than I had anticipated. Folks have been following the blog I established about growing up in the Midwest in the 60s, so I felt like a blogger rock star for a weekend.

Unfortunately, reunion activities kept me busier than anticipated, plus the area was hit with record-breaking temperatures that sent the heat index into the 107-degree range. I subscribe to Son Matt’s rule: if it ain’t fun, don’t do it.

Good thing I knew where he lives

My mother’s neighbor, Bill, from across the street, came over on his refurbed Raleigh to check out my LHT. I told him to take it for spin. He was gone so long I was glad I knew where he lived, or I’d have figured I’d never see it again.

I HAVE to ride at least once 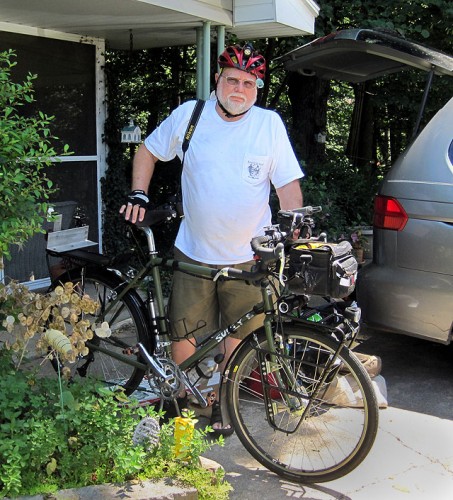 On the morning when we had to leave town, the weather turned a bit cooler. Cool enough that I would have gone for a real ride if we hadn’t had a deadline to meet. The first thing that has to be packed in the van is my LHT, so I decided to take it for a short spin around the neighborhood, my old paper route, before loading it.

I pulled out of the driveway, went downhill, then rolled back past Mother’s house so Wife Lila could shoot my picture. From there, I made a left onto Kurre Lane, which is an uphill run. I was in a mid-range of gears, just “dancing on the pedals,” as Phil Liggett would say. I crested the hill feeling pretty good. For a heavy bike, it did quite well.

I was riding the my old paper route clockwise; when I was 12-years-old on my old single-speed Schwinn, I did it in the opposite direction.

You can’t even see the STEEP part 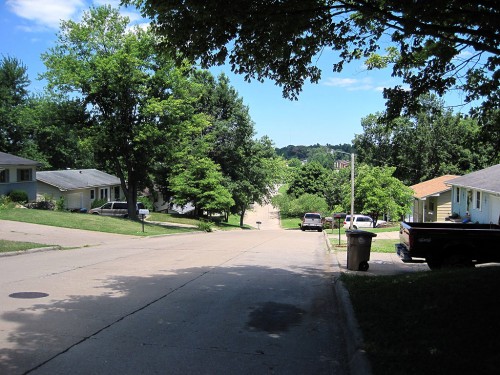 That must be the reason why, at the bottom of the downhill, the right-hand turn I made took me onto a hill  I didn’t remember. It went straight up. Straight up enough that I didn’t have time to slide into a lower gear. To keep any forward motion at all, I had to stand up on the pedals. That was good for about one revolution.

I barely had time to unclip before the bike came to a complete, fall-over-on-its-side, cow-tipping dead stop. I had to lock both brakes to keep it from rolling downhill, taking me with it. To make it worse, there was a guy waiting to back out of his driveway who witnessed my struggles.

I decided the only way I was going to climb this sucker was to reverse course, get a run up the hill behind me, then turn around and go up the steep one. That worked pretty much as planned except that I had so much pressure on the pedals that I couldn’t downshift when I was about two-thirds to the top. My only choice was to stand up on the pedals for the last 75 or 100 feet. I made it, but it was a good thing it wasn’t 10 feet taller.

NOW I remembered that I used to go DOWN this hill

This profile won’t impress anybody who is used to hills, but it’s a far cry from flat Florida.

When I go back home in October, I’ll bring the bike again. Maybe it’ll be cool, but not too cool, by then.