One of the members of the Surly Long Haul Trucker Google Group bought a new LHT. 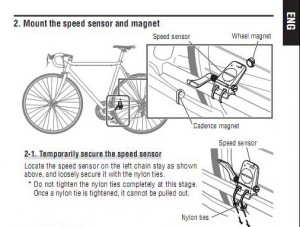 His LBS was having a hard time mounting the sensor for his Cateye V2C computer because it wanted to go where Surly puts the spare spokes.

I sent him to a page showing how my Cateye Strada Cadence computer was mounted.

Unfortunately, when I downloaded the docs for his computer, the sensor wasn’t a simple as mine. It looked like it really DID want to mount on the top of the chain stay.

I have a Cateye Strada Cadence Computer

My LBS discouraged me from buying a wireless computer. They said they have found that folks who use their bikes a lot burn batteries quickly. (I’ve been slacking off lately, so I’m afraid a battery would have lasted me a long time.) They are also prone to freaking out or going blank in an urban environment with lots of high voltage EMF floating around.

How to mount the speed sensor on an LHT 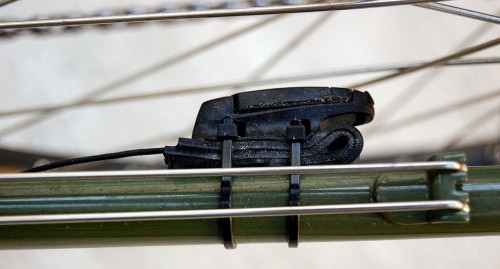 A little bit of rubber material folded up brought the speed sensor close enough that it could pick up the spoke-mounted magnet. The two small nylon ties don’t interfere with the spare spokes. 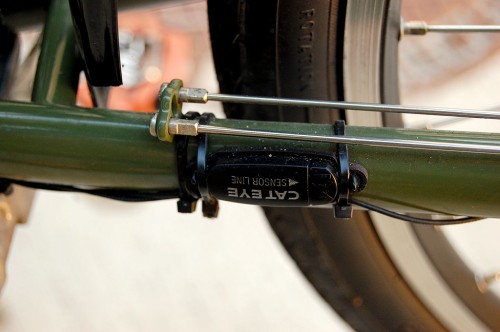 This sensor faces outward toward the crank arm and pedal. The nylon ties clear the spokes easily. 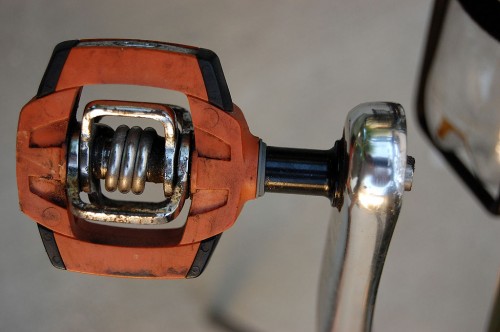 I’ve had trouble keeping magnets mounted to my crank arm when using factory-supplied parts. My kid brother, Mark, turned me on to the idea of using tiny rare earth magnets sticking onto the crank arm to trigger the sensor.

When I mounted them on my Trek 1220, I bought my first set of magnets from Radio Shack and put a drop of Marine Goop on the crank arm. (Goop is the greatest thing since sliced bread and binder twine.) It stuck for several years and thousands of miles with no issues. 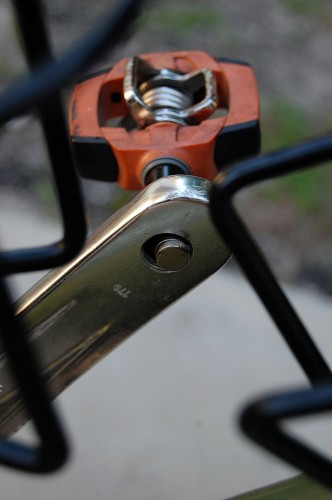 When I bought my Surly Long Haul Trucker, I found that the sensor / magnet sweet spot would let me put the magnets directly on the Crank Brothers Candy C Pedal spindle. I used two of them stacked to get them close enough for the sensor to trigger. I didn’t even bother with the Goop this time. The magnetic attraction is enough to keep them anchored to the pedal.

I also found I could buy larger, cheaper magnets from Amazon. I use the Magcraft NSN0573 3/8-Inch by 1/8-Inch Rare Earth Magnets that sell 30 for $10.99. It’s amazing h0w many ways you can use them. (Once my grandson was old enough that I didn’t have to worry about him swallowing them, we Gooped them on a bunch of his toys so he could pick them up with a toy crane.)