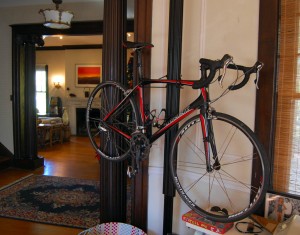 St. Louis Bro Mark, showing little respect for his older brother, wrote, “You seem to have plenty of time on your hands now that you are retired. Here is my question: Nitrogen in bike tires. Good, bad, indifferent?”

In the springtime, a young man’s thoughts turn to biking. Of course, this isn’t springtime in the Midwest and Mark has been freed for several years now of the danger of dying young. That’s why Bro Mark’s Trek Madone is serving as a piece of hanging art in his dining room.

Despite his obvious mockery, I did a little research.

One of the advantages of being older than dirt is that (A) we didn’t have much history to learn because not much had happened yet and (B) the Periodic Chart of Elements was really short because most of them hadn’t been discovered.

Nitrogen – the Cher of elements

Nitrogen, was Atomic Number 7, and was one of the Cher of elements, needing only one letter in its symbolic name – N – unlike nouveau elements like Ununoctium which is so new that it still has a temporary name and a three-letter symbol, Uuo.

To geek out even more, “Nitrogen is a common normally colourless, odourless, tasteless and mostly diatomic non-metal gas. It has five electrons in its outer shell, so it is trivalent in most compounds.

So, does it make sense?

Here are some reasons given for using Nitrogen: 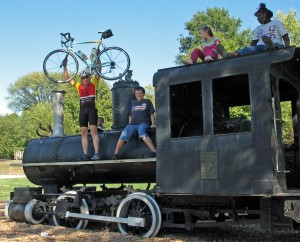 The major drawback for you

I’ve observed that your bike is so light that you often have to chase it down to keep it from flying away, as documented in this picture taken at Cape Girardeau’s Capaha Park. If it got it any lighter, it could slip away from you and become a UFO. Homeland Security will NOT be amused.