Lack of bike content alert: you won’t hear about Surly Long Haul truckers, taillights, funny helmets or bike riding today. What you’re going to read is a message of hope and some embarrassing revelations about me.

I wasn’t going to write about the Inauguration today. In fact, I made a point not to turn the TV on until an hour before noon and to turn it off as soon as Bush took to the air so I wouldn’t have to listen to Talking Head drivel.

That’s not to say that I wasn’t excited. 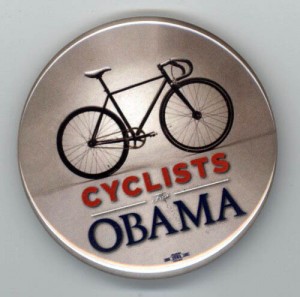 This is the first election in years where I voted FOR a candidate instead of for the lesser evil.

My friends and sometimes riding partners Jan and Mathilde changed my mind about not blogging about the day. Jan called this morning and reminded me that I often write from the perspective of someone who has seen history on horseback and thought I shouldn’t let this opportunity pass. I find it pretty easy to ignore Jan, so I didn’t do anything about it.

Then I read a Facebook comment from Mathilde, a twenty-something who has French parents, was born in Chicago and has lived in France, Scotland, Japan and Kenya, among other places. She told me this weekend how much voting in this election meant to her. Her Facebook posting asked, “Will my grandchildren hold it against me that I wasn’t in DC today? Yes I think so. I wouldn’t blame them either.”

I don’t regret missing the crowds and the cold to experience the swearing-in. I’m sure I saw more on TV than I would have seen in person. The day did get me rooting through old memories, though. Maybe that’s the difference between Mathilde and me: at her age, she’s still charging her memory batteries; I’m draining mine.

The world has changed just in my lifetime 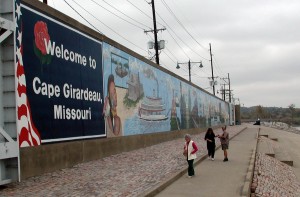 I was born and raised in Cape Girardeau, MO, which one novelist described as the last touch of civilization before you go into the Bootheel where the Old South begins.

We had a small black population, mostly segregated in the Smelterville area in what the local newspaper euphemistically called South Cape. It was a low-lying area that was unprotected from frequent Mississippi River floods. I wrote about it when I was in Cape this fall.

I don’t recall many race problems in Cape, but it might have been because the minority population was small and “knew their place.”

I didn’t learn how to swim

The city built a new municipal swimming pool before my teen years. You can still see the foundation of the old one that has been filled with dirt. I can remember overhearing an adult say, “Why did they fill it in? They could have let the coloreds swim in it.” As far as I know, the new pool was integrated from Day One, but that thinking was still around in the late 50s. 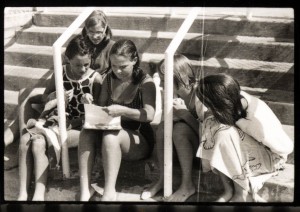 When I took swimming lessons in that pool when I was about 10 or 11, there was one black boy in my class. By the luck of the draw, I was paired with him to practice the old back pressure/arm lift artificial respiration method in use before modern CPR. I recall hesitating before touching his back, wondering if his skin would feel different than mine. Of course, it didn’t.

I didn’t learn to swim that summer, but I did learn something more valuable.

Advance, MO was a Sundown Town 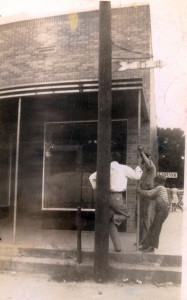 My grandfather owned a liquor store in Advance, MO. It had an office that my dad used for his construction business and a small barber shop. I remember overhearing someone say that the barber couldn’t keep a black shoeshine boy because Advance was what is now known as a Sundown Town, from the phrase, “Ni**er, don’t let the sun set on you.”

[Editor’s note: I originally spelled out the N-word because I thought it was important to make the point that that language was once so common it would appear on signs at the entrance to some towns. My wife, however, said it was a word that she was uncomfortable seeing in any context. Since she generally exhibits better taste and judgment than I do, I have sanitized it. For the record, that was a word that was never used by my family when I was growing up nor is it one that I can ever recall using outside a direct quote.]

Jim Crow was alive and well into the late middle 60s in Missouri. When I was in high school, our debate club was scheduled to compete in St. Louis. When we stopped at a roadside diner, we were told that the black member of our team would have to eat on the bus. I’m pleased that we told that diner owner what he could do with his food.

Or, at least, I’m race conscious. I try not to let that influence how I deal with folks, but I’d lie if I said that I’m not aware of a person’s color when I meet them. 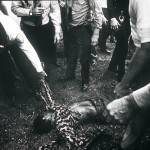 I worked in Gastonia, NC, in 1970-71, just as the schools were being desegregated. If Eskimos, as urban legend has it, have multiple words to describe “snow,” then Gastonians had an infinite number of synonyms for people of color. “Nigra” and “Colored” were the most polite. Living there was taking a huge step back to an uglier time.

After being highly sensitized to race from working in North Carolina, I went with Bro Mark to a local skating rink one visit back home. He might have been in middle school or early high school at most. I noticed that there was a teenaged black boy skating with a white girl. “Wow, Cape is a whole lot more progressive than I would ever have thought,” crossed my mind.

“That kid in the orange sweater sure can skate”

Then, my brother pointed to the couple and said, “That kid in the orange sweater sure can skate.” I saw skin color, my kid brother identified the boy by his sweater color. Cape WAS a whole lot more progressive than I had given it credit for.

I’m proud of my son, Adam

Son Adam came home from middle school one afternoon and said, “That tall, skinny photographer you sent to our school today is really funny.”

I thought for a moment, running through my staff in my mind and came to the realization that Adam was talking about Ed. My first reaction would have been to describe Ed as Black.

My son identified him as tall, skinny and funny. I never told him how proud I was of him at the time. I guess this is as good a time as ever to do it. Adam, you’re a better man than your dad.

Never as good as hoped nor as bad as feared

Until the 2000 election, I used to say that we never elected a president as good as we hoped, nor as bad as we feared. Of course, we learned that year that there are exceptions to every rule.

President Barack Obama is coming into office facing historic challenges and carrying the burden of high expectations that I doubt anyone can meet. I wish him success for his sake and ours.

What I really hope is that he survives his term in office. I lived through the assassinations of John F. Kennedy, Malcolm X, Robert Kennedy, Martin Luther King and the attempts on Presidents Gerald Ford and Ronald Reagan. I don’t know what would happen to the country and the world if someone would assassinate Obama.

One Reply to “Obama: What Just a Few Generations Will Do”