One of the reasons I don’t do many group rides is that they start too early. I really hate dragging myself out of bed at ye-god-o’clock just to get dropped by a whole herd of riders.

The Rotary Club Lake Okeechobee Ride is about 75 miles away

When I signed up for the Rotary Club Lake Okeechobee Scenic Trail (L.O.S.T.) ride held March 28, I wasn’t looking forward to getting up at 4:30 in the morning to drive from West Palm Beach to Okeechobee to photograph the 8 A.M. start.

Where’s a cheap place to stay?

I’m not ashamed to say that I’m cheap. And my motel standards are pretty low. 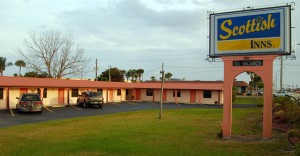 My range of options was expanded

I had one advantage in my motel quest: Wife Lila had something to do back in West Palm Beach on Saturday, so my range of options was expanded.

She has some crazy idea that, in addition to my criteria, the place should actually be big enough to turn around in and be “nice.”

I decided to check out the Scottish Inns

What caught my eye was $44.10. An extra couple of hours of sleep is worth that. But, did it meet my checklist?

I remembered passing the place and recalled that the exterior looked like your old-fashioned 60s motel, but it WAS freshly painted and the grounds were well-kept.

I made a call to Jim McInnes

Calling a local to ask about motels generally doesn’t do much good. After all, if you LIVE in the town, you probably don’t have a lot of personal experience with the local sleeperies. Still, I called ride organizer Jim McInnes to see if he could give me any advice.

He had to think about it for awhile, but he said it would probably be OK. 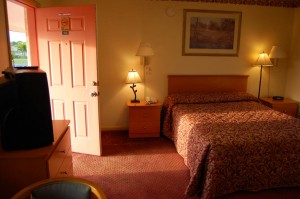 When I finally called the Scottish Inns, I was told that a non-smoking room was five bucks more than the cheapest room advertised, so it came to $54.45, with tax.

You won’t get lost in the bathroom

There wasn’t room to back up to shoot an overall of the bathroom. Let’s just say that it was clean and functional.

[A thumbnail shot is plenty big to get across the feeling of spaciousness.]

The first thing I noticed in the bathroom was that the toilet paper roll was just about empty. [See checklist above.]

A call to the front desk remedied that. It wasn’t until later that I noticed a spare roll above the towels. Most places would have changed out a roll as low as this one, but I guess that’s how they keep prices low.

While the manager was there, I pointed out that the wall-mounted lights above the bed didn’t work. He said that they had been replaced by the two lights on either side of the bed in the picture, but the old ones hadn’t been removed yet.

Would I do it again?

Yes. I got a good night’s sleep on a decent bed for a reasonable amount of money. [It’s hard to believe that I consider a $55 room reasonable when I think back on one I rented in the Missouri Ozarks for $2 a night back in 1965 or 1966. I can remember when the 8 in Super 8 stood for $8.]

Where is the Okeechobee Scottish Inns?