Southridge, one of West Palm Beach’s oldest public housing projects is exactly half-way between my home and the newspaper where I worked for 35 years. It’s also just across the street from the old carriage house I wrote about in May. Both of them are in the shadow of the Southern Blvd. FEC Railroad overpass. 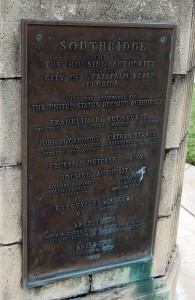 I’ve probably driven by the place close to 6,000 times. And that’s not an exaggeration. It could be off by a few hundred either way depending on how many days I went home for lunch. (Of course, that’s offset by the number of times I got called back into the office at night or on my days off.)

Southridge dates back to FDR

One day I happened to stop to make a minor bike adjustment and noticed a plaque attached to the flagpole in front of the Administration bulding. The city’s web site says Southridge was built in 1941, but the marker says 1940. I’ll go with the earlier date.

The more things change, the more they remain the same. The housing project was built as one of Franklin D. Roosevelt’s alphabet soup of economic stimulus programs.

Providing housing was probably secondary to putting a huge population of jobless to work in the period before World War II. 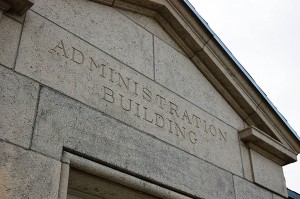 A glance at the typeface used on the Administration Building will confirm that it’s from the era when many of the country’s public buildings were constructed.

In FDR’s day, a lot of the jobless who built public buildings, cleared forests for parks and laid down new roads were folks who were used to working with their hands.

I wonder what kind of contribution hedge fund managers and dot.com types will be able to make if Obama has to stir the alphabet soup.

Dunbar Village, in the north central part of West Palm Beach, was built first and is the oldest public housing development in the Florida. It made national news two years ago because of a particularly horrific gang rape.

Traces of Jim Crow are still around

When I moved to West Palm Beach in the early 70s, the contrast between Southridge and Dunbar Village was like black and white.

Southridge is well-kept and beautifully landscaped 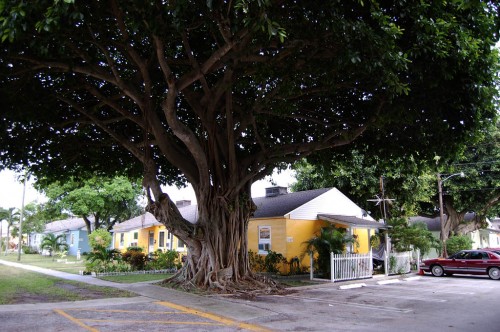 Southridge is beautifully landscaped with lots of individual touches that indicate that residents have a pride of  “ownership.” Many of the homes have well-maintained gardens around them.

In contrast, even the city’s Housing Authority web site acknowledges that “[Dunbar Village’s] original landscaping plans indicate some thought went into the placement of shade and ornamental palm trees. However, few, if any of these trees remain standing sixty-five years later. Some healthy trees and shrubs do thrive, despite the lack of irrigation.” (My emphasis.)

Dunbar, to be charitable, has suffered what Daniel Patrick Moynihan would call “benign neglect.” After all the bad press, there was some discussion of razing Dunbar in a classic case of  “we had to destroy the village in order to save it.”

[Note: When I clicked a link on the West Palm Beach Housing Authority web site that was supposed to take me to a story about the revitalizing of Dunbar Village, I received an error message, “The connection has timed out. The server is taking too long to respond.” Benign neglect, I suppose.]

Southridge has strong sense of community 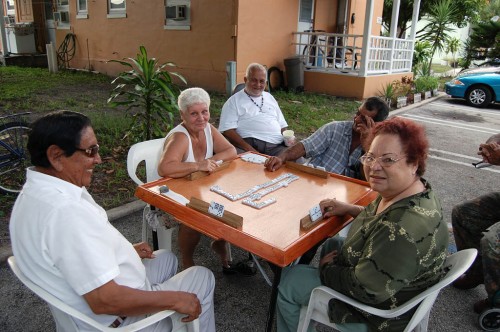 The population of Southridge appears to have become more diversified over the years. When I rode through there last night, I’d say that a large number of the residents are Hispanic, which reflects the overall neighborhood makeup.

This was one of those many instances where I wish I had paid more attention in high school Spanish class. When I pulled up to this group of elders playing dominoes, I was able to communicate enough to find out that the lady with the white hair was winning, but that was about it.

They were obviously amused at having their game interrupted by a guy wearing a glow-in-the-dark jersey straddling a bike with winking, blinking and nodding head and taillights.

I told co-rider George Primm, that I wish I could speak the language well enough to spend a week at the 148-unit project collecting stories. I’m sure there are some great ones.

I spotted an surprisingly large number of bicycles and tricycles at Southridge. 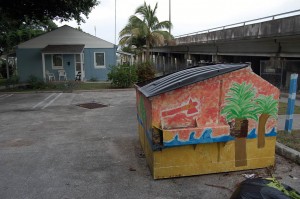 Even the dumpsters are colorful

The Florida Department of Transportation says ab0ut 20,000 vehicles a day passed over the Southern Blvd. overpass (right) in 2007.

I wonder how many of those drivers looked over the guardrail at the neat little community nestled next to the bridge.